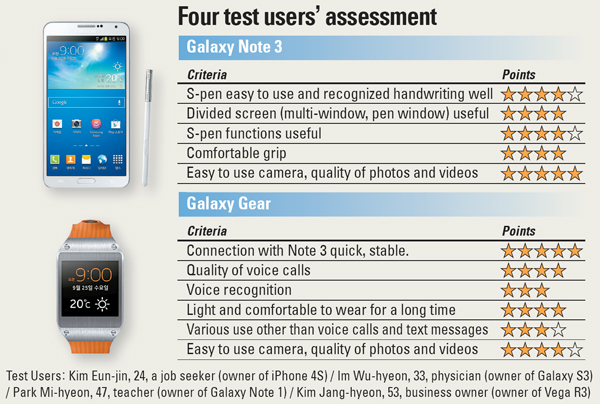 Reactions were mixed, with the New York Times saying the watch’s functions are not worth $300 and the Washington Post praising its originality.

The JoongAng Ilbo invited four panelists to use the phablet and smartwatch for 24 hours. Two of them used Galaxy smartphones, while other two used an iPhone and Pantech’s Vega R3.

The Bluetooth function, which keeps the two devices connected, received positive feedback in general. Panelists said it was convenient to check daily schedules and set alarms.

“The Note 3 is huge, so I just leave it in my bag. Without the Note, the Gear lets me easily check text messages, make calls and even have conversations on messenger,” said panelists in their 20s and 30s.

Although some overseas media reported the Gear is inconvenient since voice calls and text messages are only available when connected to the Note 3, panelists said they were generally satisfied because the Gear cannot replace the Note.

They also praised the quality of voice calls. “I can move around without the huge smartphone when driving or working out at the gym or golf course. I found it useful,” a male panelist said.

The panel praised the Gear’s camera functions, but hoped video calling and a high-definition camera will be added to the smartwatch.

Galaxy Note 3 received good feedback on the upgraded stylus pen, called S-pen. Working users in age groups from the 30s to the 50s said the new phablet is perfect for work. The pen grips as comfortably as a regular pen and recognizes handwriting well, which helped them take memos in a hurry and easily reorganize afterward.

A job-seeker in their 20s mainly used the Note when researching and organizing data. They liked the new drag-and-drop function, which captures photos and Web sites on the screen and the scrapbook.

Panelists in all age groups responded that they were impressed by the phablet’s full HD screen in a 1,920/1,080 resolution, and with the 13 megapixel camera.

Meanwhile, some found the Gear inconvenient for music, wishing it could store and play like an MP3.

They also felt the battery life was insufficient, although Samsung says it lasts 25 hours. Three of the users said it lasted less than a day.

Panelists in their 40s and 50s found the Gear difficult to use. Unlike regular smart devices, the wristwatch lacks a menu and options to go back and forth. The users had to figure out the functions by physically pushing or pulling parts of the watch based on written directions in the manual. The less tech-savvy generation found the process difficult.

The Gear’s camera application, called memographer, a compound word for memory and photographer, was perceived somewhat negatively. It takes photos when the gear faces front.

“I would just take out the phablet if I didn’t need to sneak some shots or take them urgently,” the panelists said.