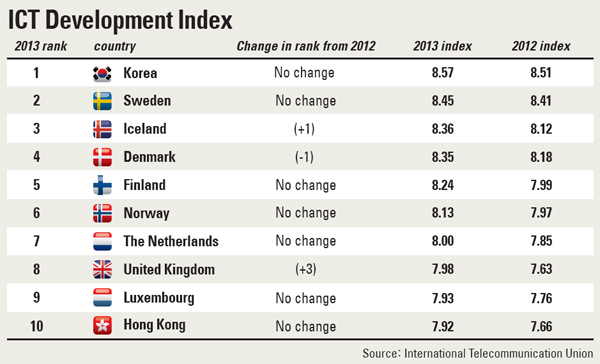 Korea maintained its No.1 spot as the world’s most advanced country in terms of Internet access and development, the International Telecommunication Union (ITU) announced yesterday.

The 2013 ICT Development Index (IDI) put Korea ahead in the 157-country ranking for the fourth straight year, said the UN agency that oversees the ICT sector.

“The fact that Korea won the No.1 spot for four straight years in the ICT sector is inspiring in and of itself,” said Yoon Jong-rok, vice minister of Science, ICT and Future Planning, while attending the event in Geneva where the index was announced. “But we will work harder so the world’s top-level ICT capacity can be put to good use in every segment of society.”

The result, the ministry hopes, will solidify Korea’s image as an ICT powerhouse. Korea was No. 1 in the United Nations E-Government Survey last year. It also topped the ICT infrastructure survey by the World Intellectual Property Organization early this year.

Korea was ranked second to Sweden when the IDI began in 2009. The index assesses measures Internet access, use and applications.

Korea was ranked 11th in the accessibility segment of the 2013 IDI, but finished first in the application category and second in usage.

Strangely, for a country that produced the world’s largest and third-largest smartphone vendors, Samsung Electronics and LG Electronics, Korea was only ranked in 70th in the rate of subscribers to mobile phones. The ministry said that is because the ITU measures the mobile phone subscriptions according to the number of purchased prepaid SIM cards, which are not used much in Korea.

Korea was first in percentage of landline telephone subscriptions and fifth in the percentage of subscribers to high-speed wireless Internet.

Before the IDI, the ITU used several smaller indices, including the Digital Opportunity Index, which Korea topped for three years after it started in 2005. Korea finished 22th in the ICT Opportunity Index in its latest ranking that came out in 2007.