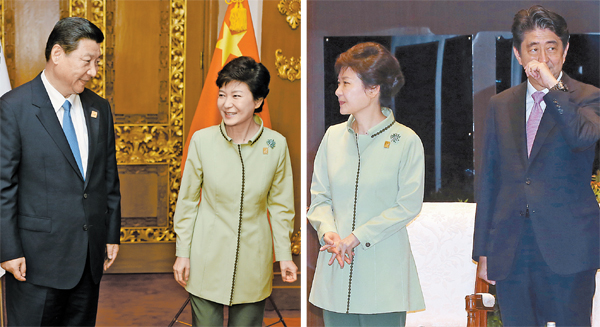 Left: President Park Geun-hye smiles as she meets Chinese President Xi Jinping before a bilateral meeting of the two leaders on the sidelines of the Asia-Pacific Economic Cooperation summit on the resort island of Bali, Indonesia, yesterday. Right: President Park, however, snubs Japanese Prime Minister Shinzo Abe, even though she stood next to him at an APEC meeting yesterday. [Joint Press Corps]

“It is necessary to suspend North Korea’s upgrading of its nuclear program,” said Park in a talk that lasted about 45 minutes on the sidelines of the Asia-Pacific Economic Cooperation (APEC) meeting at the Indonesian resort. “Close cooperation between the two countries is very crucial for North Korea to make the right choice .?.?. When a large number of North Korean residents reportedly suffer chronic malnutrition, [the country] should not be pouring [every resource] into developing nuclear weapons. I formally ask China to exert effort to persuade North Korea to concentrate on economic development.”

She also urged North Korea to come up with “sincere and faithful” measures to resume six-party talks.

The two leaders have met three times in the past three months, and the meeting yesterday at APEC follows a late June summit in Beijing when Park made a state visit. Xi is the first leader of a country to have a second one-on-one with the South Korean president since her inauguration late February, underscoring the importance of the two countries’ ties.

While South Korea and China have been devoted to solidifying those ties, South Korea’s relationship with Japan is curdled.

Prime Minister Shinzo Abe has taken a rightist stance on issues such as Japan’s wartime treatment of Asian women recruited to be sex slaves.

Park and Abe sat next to each other later yesterday in a multilateral meeting thanks to the APEC alphabetical order seating policy. But they didn’t converse.

When Park encountered the Japanese premier at the G-20 summit on Sept. 5 in Russia, Park only made a simple gesture of greeting.

There may be at least two more occasions during the summit that the two could encounter each other, according to Blue House officials. They said Park’s aides have prepared various scenarios should the two leaders start a conversation over thorny issues.

A week earlier, Park made pointed remarks about Japan in the presence of U.S. Secretary of Defense Chuck Hagel, who was on a visit to Seoul to celebrate the 60th anniversary of the Korea-U.S. alliance.

The president said South Korea and Japan have failed to build trust because of the Japanese leadership, which has repeatedly made regressive comments about history and territory issues. She said that her steadfast principle of trust building is impossible with Japan until it has a fundamental change of attitude.

It is highly likely Park would reiterate this position should she get to talk with Abe, according to sources.

Meanwhile, Japan’s Asahi Shimbun discussed in an editorial yesterday the idea of Park offering Abe a meeting. The Japanese daily wrote that it was true that both Korea and China distrust the Japanese prime minister’s historical viewpoint.

But, the editorial continued, Abe did bring up “womenomics,” an idea relating to the advancement of women in society, at the United Nations General Assembly in September. But he did not bring up the issue of Japan’s wartime sex slaves, or comfort women, and that angered Park, the Asahi said.

The Asahi claimed Park would be wiser to face the problem and seek ways to resolve it rather than to seek reasons to sever a relationship with Japan.

The president is set to fly to Brunei tomorrow to attend a string of meetings, including the Korea-Asean, the Asean+3 and the East Asia summits. She will then pay a state visit to the Indonesian capital of Jakarta on Thursday.