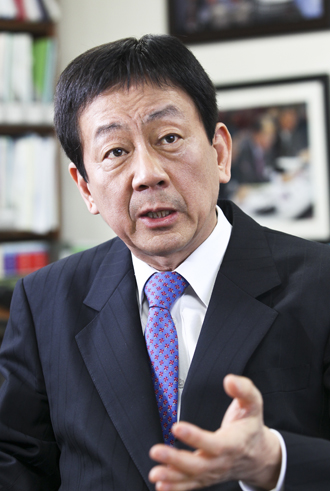 In an interview with the JoongAng Sunday on Friday, five days after he stepped down as the health and welfare minister, Chin Young defended his decision to quit after the government scaled back its promise to pay a 200,000 won ($186) basic pension to all Koreans 65 years of age and older.

“I offered to resign because I could not campaign for a government policy that breached my principles,” he told the paper. “I understand how President [Park Geun-hye] could feel disappointed about my decision, but I hope she can understand it.

“A minister working for a democratic government can have opinions that are at odds with government policies,” Chin. 62, continued. “If differences in policy opinions are not resolved, he or she should be able to decide to depart from their position.”

Chin, a three-term lawmaker, resigned because he did not agree with the scaling down of the pension plan, a major promise by Park during last year’s presidential campaign, which he authored.

Under the revised plan, only seniors in the bottom 70 percent income bracket will be eligible, and the size of the pension for the most affluent in that group will depend on how much the individual paid into the national pension scheme. Chin intended the basic pension to be totally separate from the national pension system.

The former welfare minister said he chose to resign because he couldn’t possibly try to convince the opposition to accept a basic pension plan that he opposed.

“As I have stated many times, I could not accept the government’s plan, which links the basic pension plan with the national pension,” he said.

The government says they will receive at least 100,000 won.

The ministry estimates that each additional year of contributions to the national pension plan would reduce the basic monthly pension paid to a senior by about 10,000 won.

Q. Some people in the ruling Saenuri Party have criticized your resignation, saying you were already aware of the government’s plan to link the two pension schemes during the campaign last year.

A. No, that was not the case. During the campaign, it was agreed that the government should strive to produce combined benefits from having the two pension schemes: the national pension and the basic senior pension. Linking the two schemes in a way that determined how much the seniors would be paid was not part of the pledge.

Then why was the plan changed to link the two pensions?

I think officials at the Blue House did not fully comprehend the issues and implications of welfare policies. What I am most troubled about is a reaction from the Saenuri Party [over my resignation]. I met many ruling party lawmakers with the revised plan before I tendered my resignation and many said they would not accept the plan.

Then all of a sudden, they flip-flopped on the issue and supported the scaled-down scheme. With the ruling party turning its back on me, I had no choice but to resign.

Some figures in the ruling party and the presidential office have criticized your decision to quit the cabinet, saying it has damaged President Park’s leadership. Some even said you betrayed her.

If everyone does as they’re told by the president with no conflicting opinions, would that be a democratic society? If a cabinet member has different thoughts on certain policies, he or she should freely state them.

And if their opposition is not accepted [by the president], they could opt to leave the office. Branding such a move as a selfish action to weaken presidential leadership is just flat-out wrong.