Suicides in Seoul dip for first time in 6 years

Suicides in Seoul dip for first time in 6 years 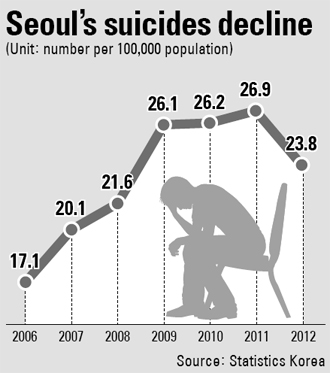 Seoul’s suicide rate last year declined for the first time since 2006 and was the lowest among other Korean cities, according to data compiled by the Seoul Metropolitan Government.

Suicides in Seoul dropped for both men and women.

The city hailed the decline as partly the result of the city government’s efforts to reduce the prevalence of suicides.

Last year, the city government erected cheerful signs along the guardrails of Mapo Bridge, nicknamed “suicide bridge.” It also installed four emergency phone boxes on the bridge that connect despondent people to a suicide hotline or the emergency 119 service.

The city set a more ambitious target to cut the number of suicides in half by 2020.

“Seoul is now trying to come up with ways to prevent suicides in neighborhoods with higher suicide rates,” said Kang Jong-pil from the welfare and safety division of the city. “We’d also like to work on campaigns to promote the value of life.”

In Korea, about 43.6 people take their lives every day, according to Statistics Korea. Nationwide, an average of 31.7 people per 100,000 ended their lives in 2011, nearly three times higher than the average of 12.9 for other member states of the OECD.