Growth estimates may be wishful thinking

Growth estimates may be wishful thinking 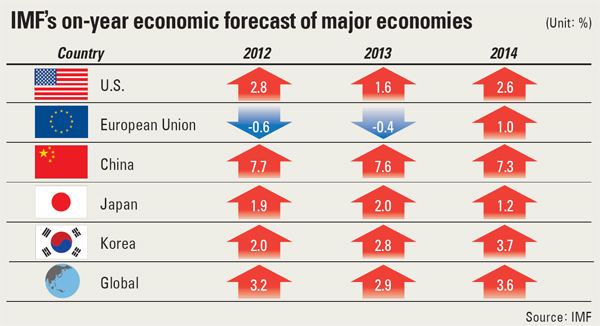 Recent cuts in growth forecasts by numerous institutes have ignited a controversy over inflated predictions by the government that could have a negative impact on the economy if major economic policies are based on inaccurate figures.

The Ministry of Strategy and Finance forecast the economy will grow 3.9 percent next year and drew up the 2014 government budget on that premise.

The government in late September announced a budget plan with 357.7 trillion won ($332.2) in total expenditure, including more than 100 trillion won on welfare.

Due to the revised estimate, the ministry also reduced its revenue projection for next year to 370.7 trillion won from 372.6 trillion won. It was the first time a revenue estimate has been reduced since 2010.

Since revenue is estimated to fall as spending rises, the country is likely to face a 25.9 trillion won fiscal deficit next year when non-budget items are added in, particularly the four national insurance schemes.

The total amount of national debt is forecast to spike from 480.3 trillion won this year to 515.2 trillion won, accounting for 36.5 percent of next year’s GDP.

Due to President Park Geun-hye’s determination to expand welfare benefits without raising taxes, the Finance Ministry is making an all-out effort to maximize tax revenue, hoping the economic situation improves next year.

However, many institutes at home and abroad, including the International Monetary Fund, have lowered their growth estimates for Korea next year.

The Budget Office cited weak recovery signs in the U.S. and euro zone economies, along with the country’s growing household debt.

The Bank of Korea is also likely to cut its growth forecast at its monetary committee meeting tomorrow.

Yesterday, the IMF slashed its outlook for Korea’s growth from 3.9 percent to 3.7 percent. For this year, the Korean economy should grow 2.8 percent, the IMF forecast.