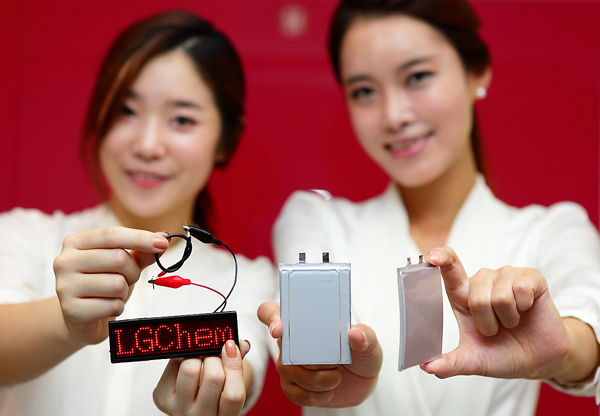 LG Chem said yesterday it has completed development of a cable battery, which - along with the recently introduced stepped and curved batteries - the company hopes will help to power its drive to be a leader in the global market.

“Through the exclusiveness of our unique technology, LG Chem has succeeded in launching batteries for the future that have not existed before,” said Kwon Young-soo, who heads the energy solution unit at LG Chem. “We will continue to strive to be No. 1 globally by developing more optimized, safer and longer-lasting batteries.”

Stepped batteries refers to a type in which two or more batteries are placed on top of each other. The battery maximizes available space within a device and is well suited to the IT gadget trend of flexible design, says the company.

For instance, recent mobile devices use round shapes and designs with rear buttons, creating “dead space” inside the gadget that stepped batteries can fill to increase power capacity, according to LG Chem.

In the LG G2, battery capacity was increased by 16 percent, allowing an additional three hours of use before charging, the company said. LG Chem said it plans to make stepped batteries that incorporate additional units depending on customer needs at its Nanjing plant.

They will allow the IT device maker to incorporate curved screens and more flexible designs in smartphones, watches and eyeglasses.

The cable battery will be used in IT devices that can be bent, worn and even tied in a knot. It has been designed to not heat up even during long periods of use, according to LG Chem.

In addition, the waterproof features of the battery allow it to be used in wearable gadgets regardless of flexibility requirements, from necklace types to smart watches.

Meanwhile, the company said it will display its products at InterBattery 2013, which starts next Wednesday at COEX, in southern Seoul.