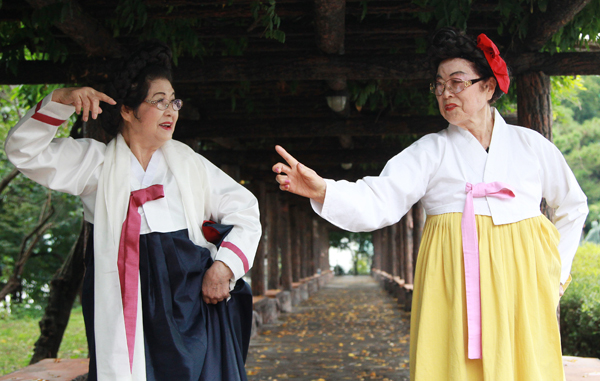 One of the dancers, Kim Gil-ja, often blinked with her very fake eyelashes that felt awkward to her. Another dancer, Park Ok-soon, wore gache, the traditional big wig for Korean women, on her head. It was impossible to guess their ages.

“I’m presenting these dances by listening to the seniors,” said Park.

The women recalled their youth during the recent Five Northern Korean Provinces Intangible Cultural Property Festival. They performed with more intense emotions due to the postponed reunions of separated families, which have been planned for three years.

“We apply [for the reunions] every time to meet family in the North, but it just doesn’t work,” Park said. “Then I try to console myself with ‘Aewonseong,’ the song I have hummed at home when things were troublesome and tiring.”

The two, both alumnae of the Bosin Girls’ School in North Hamgyong, have been reproducing the original “Aewonseong” since 2005 and made it into a 30-minute performance with 60 people from the same hometown. They developed choreography according to the meaning of the lyrics and tap on wooden bowls filled with water. Once a week, they study choreography and rhythm, and bring their children with them in an attempt to pass on the tradition. They also made sure an “Aewonseong” program was included in training for North Korean defectors.

The women said they are proud of themselves for protecting intangible heritages that are vanishing even in the North, but they fear they are too old to continue.

“Please encourage us so that we can support selected young trainees,” they said.