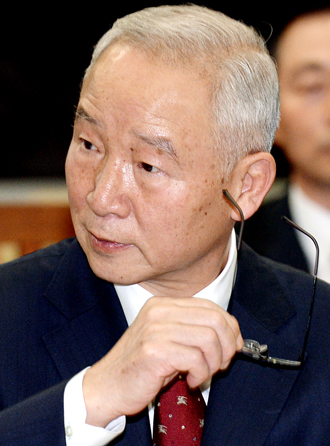 National Intelligence Service Chief Nam Jae-joon speaks at the meeting with lawmakers on the Intelligence Committee of the National Assembly at the assembly in Yeouido, Seoul, yesterday. By Park Min-gyu

North Korea has restarted its nuclear reactor in the Yongbyon complex and made preparations to launch a long-range ballistic missile, South Korea’s spy agency said yesterday.

Leader Kim Jong-un also ordered the testing of an engine for a long-range ballistic missile at a launch site in Tongchang-ri, North Pyongan Province, in the northwestern tip of the country, the NIS said.

“To strengthen its nuclear capabilities, North Korea has restarted its 5-megawatt nuclear reactor,” a ruling party lawmaker on the committee said at a briefing with reporters yesterday. “They continue to develop their nuclear weapons, testing missile engines and reinforcing troops targeting the five westernmost islands of South Korea in the Yellow Sea.

“The NIS also said that North Korea has dispatched some newly-developed, 240-millimeter (9.45-inch) caliber multiple rocket launchers to Nampo or Hamhung, and some 120-millimeter launchers to Kangwon Province,” the lawmaker said.

When it comes to Kim Jong-un’s reshuffle of his inner circle, the NIS said the North Korean leader has replaced 44 percent of the military’s senior officers. On the subject of the reunification of the two Koreas, the young leader has frequently predicted a “unification by force” within three years, NIS officials told lawmakers.

The NIS officials also addressed other issues. They said Kim, whose mother was the third wife of late leader Kim Jong-il, has ordered officials to build a grave for his mother, Ko Yong-hui, in Mount Taesong, Pyongyang, and forced them to pay tribute to her. Ko, a Korean-Japanese dancer, reportedly died in 2004 of cancer.

Concerning rumors that first lady Ri Sol-ju was involved in the execution of 10 members of the Unhasu Orchestra, which she used to perform with, NIS chief Nam Jae-joon told lawmakers, “Although I don’t know exactly the circumstances surrounding Ri, we are aware of the execution of the 10 orchestra members.”

The leadership of the twentysomething Kim Jong-un doesn’t seem to appeal to older officials, the NIS told lawmakers.

“Among senior officials in North Korea, skepticism about Kim Jong-un’s leadership is emerging,” the ruling party lawmaker said. “According to the NIS, he lavished about $300 million on building entertainment facilities, including a horse-riding track, a ski resort and a water park.

“Meanwhile, poor conditions in the North Korean military led to an increase in accidents at bases two or three times more than in previous years.”

North Korea yesterday released a statement by a spokesman of its general army staff denouncing the participation of the aircraft carrier USS George Washington in trilateral maritime drills by South Korea, Japan and the United States. The powerful U.S. carrier arrived in Busan to participate in the regular exercises, which were supposed to start yesterday but were delayed due to Typhoon Danas.