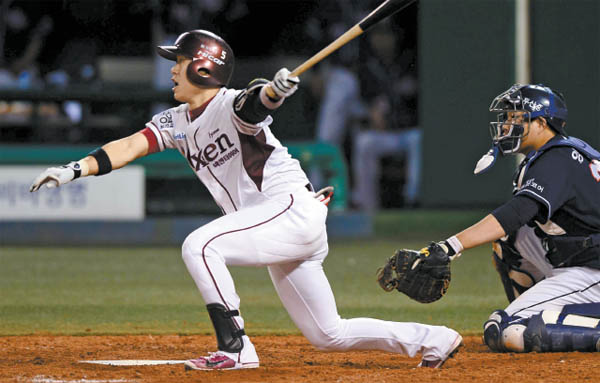 Kim Ji-soo of the Nexen Heroes hits a walk-off single in the 10th inning against the Doosan Bears yesterday in Mok-dong, western Seoul. [NEWSIS]

Infielder Kim Ji-soo singled in the bottom of the 10th inning to give the Nexen Heroes a 3-2 victory over the Doosan Bears in Game 2 of the first round of the Korea Baseball Organization’s postseason yesterday. The win gave the Heroes a 2-0 lead in the best-of-five series. They will face the LG Twins in the second round if they win one more game.

The highlight of the game came in the bottom of the 10th inning. Heroes’ slugger Park Byung-ho was hit by a pitch from Bears reliever Oh Hyun-taek and went to third base, thanks to a terrible pick-off attempt. Infielder Kim drove Park home with a single to right-center, ending the four-and-a-half-hour game.

The outcome of the game was determined by the cleanup hitters, who are producing conflicting results. Both Park of the Heroes and Kim Hyun-soo of the Bears were hitless, but while Kim hurt his team with poor defense and hit into a double play, Park was viewed as a threat by the Bears as he was hit by a pitch and given what looked like an intentional walk.

Kim Hyun-soo’s right ankle is injured. He limped in pain when he ran to the bases, but the bigger pain for the 25-year-old all-star was his team’s two straight losses to the Heroes. He batted fourth in both games but was hitless and failed to drive in any runs.

“Kim suffered from that injury all season long,” said Jeon Jae-chun, the Bears’ trainer. “When the weather is bad like it was on Tuesday, that pain just gets a lot worse.”

Kim mostly batted third in the regular season, but started hitting in the cleanup spot in the Sept. 25 game against the NC Dinos as the Bears’ manager, Kim Jin-wook, wanted to boost the team’s offensive power in preparation for the postseason. Kim had used several hitters in the cleanup position, including veteran Hong Sung-heon and Kim Dong-joo, but they weren’t effective enough.

But it seems like the cleanup spot is a burden for Kim. He struck out against Heroes’ starting pitcher Ben Hackken with two outs and a runner on second base in the first inning and hit into a double play with no outs and a runner on first in the fourth. He also failed to drive in a runner from third base, with one out in the eighth inning, and had another 0-4 game.

In Game 1 on Tuesday, Kim grounded out to the shortstop with a runner on third and one out in the top of the sixth inning when the game was tied, 2-2. The Bears allowed a run in the bottom of the sixth.

“Hyun-soo needs to overcome the current situation,” Bears’ manager Kim said. “I’m not considering replacing Kim with others at first base because one of our best offensive tools is speed and possible replacements would undermine such a strength.”

While Kim struggled at the plate, Park Byung-ho, 26, the Heroes’ first baseman, showed off his power in his first career postseason at-bat. Some analysts said Park’s biggest weakness is lack of experience in the postseason and international matches, although he had an MVP-level season with a .318 batting average, 37 home runs and 117 RBI. However, he blasted a solo home run off of Bears’ starting pitcher Dustin Nippert, giving the team a 2-0 lead in the first inning of Game 1. He was hitless yesterday but reached base twice.

“I’m trying to enjoy every game just like my veteran teammate Song Ji-man told me to,” Park said after the game. When media day was held on Monday, Bears’ manager Kim called Park the biggest threat to his team, saying, “I’ll tell my pitchers to walk him when he appears at bat with two outs in a bases-loaded situation if we are leading the game by two runs.”

When the game was tied 2-2 in the third inning in Game 1, the Bears walked Park when the Heroes had runners on second and third with two outs, and walked him again in the sixth when he was the leadoff hitter. Park scored the Heroes’ third run of the game in that inning.