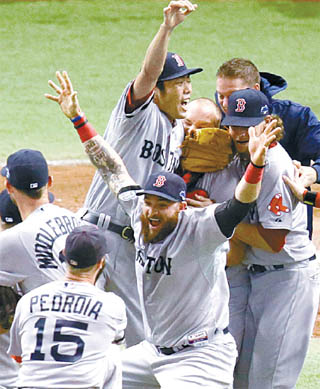 The Boston Red Sox advanced to the American League Championship Series with a 3-1 victory over the Tampa Bay Rays on Tuesday, while the Detroit Tigers forced a decisive fifth game in their series with an 8-6 win over the Oakland Athletics.

Shane Victorino’s infield single broke a seventh-inning deadlock and journeyman Craig Breslow gave Boston a huge boost out of the bullpen as the Red Sox rebounded to win the best-of-five playoff, 3-1.

Koji Uehara got the final four outs - one night after giving up a game-winning homer.

Back in the ALCS for the first time in five years, Boston opens at home Saturday against the Athletics or Tigers. Oakland hosts Detroit in a decisive Game 5 on Thursday.

Both managers mixed and matched all night in a tense game that felt more like a chess match. Desperately trying to avoid elimination, Rays skipper Joe Maddon used nine pitchers.

On a night of desperation, dispute and finally, delirium, the Detroit Tigers are heading back to California with the help of Max Scherzer and some fans in right field. Playing catch-up most of the way, the Tigers drew even first with Jhonny Peralta’s three-run homer in the fifth inning and then on Martinez’s solo shot in the seventh. A couple of fans tried to catch Martinez’s drive, and at least one of them bobbled the ball as he reached over the railing above the wall - preventing right fielder Josh Reddick from having any chance at a leaping grab.

Reddick and center fielder Coco Crisp protested, pointing up at the stands in the hope of a fan-interference call. But umpires upheld the home run after a replay review. Scherzer struck out Reddick and Stephen Vogt before getting pinch hitter Alberto Callaspo to line out to center.

Detroit, which had no hits through the first four innings, added three runs in the eighth on a wild pitch and a two-run double by Omar Infante that made it 8-4. AP