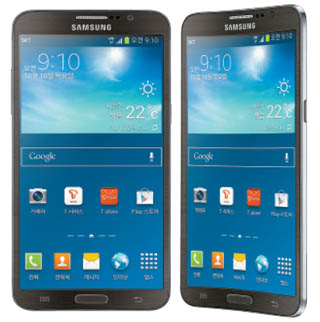 Galaxy Round from the front and side. Provided by the company

Not long after hinting at introducing a smart device with a curved display, Samsung Electronics introduced the Galaxy Round.

Like the Galaxy Gear smartwatch introduced last month at one of the world’s largest consumer fairs in Berlin, the smartphone with a curved display is the first of its kind.

The Galaxy Round is a variant of Samsung’s popular Galaxy Note “phablet.” Its curved display moves the tech world a step closer to wearable devices with curved and ultimately flexible screens.

The Galaxy Round’s 5.7-inch display has a slight curve on the vertical axis and weighs less than the Galaxy Note 3, allowing a more comfortable grip than flat-screen models, mobile carrier SK Telecom said in a statement.

Curved displays open up possibilities for bendable designs that could eventually transform the high-end smartphone market by allowing mobile and wearable gadgets to take new forms.

“As a result of its unique curved design, users can take advantage of round integration experiences like the Roll Effect that enables them to check information such as the date, time, missed calls and battery life easily when the home screen is off, and the Gravity Effect that creates visual interaction with the screen by tilting the device,” Samsung said in a statement.

LG Electronics plans to introduce a smartphone with a vertically curved display in November, a source said this week.