The JoongAng Media Network’s ninth annual flea market comes back this year at a new location in Gwanghwamun, central Seoul, on Oct. 20. Attendees can shop for a charitable cause, bid for items donated by top K-pop stars, athletes and politicians, and participate in a wide variety of family-friendly activities.

Over the past eight years, about 2.74 million people have participated in the “WeAJa” charity flea market, which has donated more than 1 billion won ($929,526) to underprivileged children. This year at the market, items donated by popular K-pop stars will be auctioned off, including a signed white helmet from the girl group Crayon Pop, which went viral worldwide with its hit “Bar Bar Bar” and started a craze for spandex tights and bicycle helmets. Crayon Pop’s publicity representative said, “Helmets were a key to our popularity, and we hope that this one can be put to good use.”

The popular boy band Infinite donated the sweat-soaked stage costumes they wore performing their summer hit song “The Chaser,” which they also wore in a photo shoot for their mini-album.

Yoo Jae-suk, dubbed the nation’s top MC and TV show host of popular programs like Infinite Challenge and Running Man, contributed a yellow backpack and sneakers he wore on the air, and a fellow comedian and host Shin Dong-yup donated a tan leather jacket. Shin said, “The weather is getting chillier, and I hope it goes to someone who needs it more than I do.” Kim Gu-ra, another popular TV show host known for his sharp tongue, donated sunglasses that were a present from the popular two-member band Yurisangja’s vocalist, Lee Se-jun. 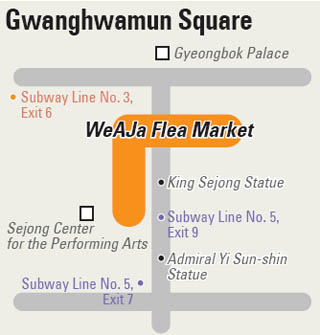 Top athletes also contributed items, such as a golf club from the pro golfer Choi Kyung-ju; a bat from a former pro baseball player, Yang Joon-hyuk; and a signed training suit from the head coach of the national football team, Hong Myung-bo, worn on the first day of his tenure with the team in June. Hong said, “I hope it can be used to help children in need.”

Held in four locations, the flea market is hosted by the JoongAng Media Network, the Seoul Metropolitan Government, Busan Metropolitan City, Daejeon Metropolitan City and the North Jeolla Provincial Government. Its slogan is “The thrill of sharing, a happy gathering.” Half of the market’s profits go to underprivileged kids.

The archbishop said, “The WeAJa flea market is a starting point for giving to others the present of love without any conditions.”

Held every year since 2005, the flea market was moved this year from the Seoul World Cup Stadium in Sangam-dong, western Seoul, to the more central and easily accessible Gwanghwamun Square. It will run from 11 a.m. to 4 p.m., and is easy to find from lines Nos. 3 and 5 of the subway system.

Three other locations will also host the flea market - at Shinsegae Centum City in Busan from 10 a.m. to 2 p.m, and from noon to 4 p.m at both Boramae Park in Daejeon and the plaza in front of the North Jeolla Provincial Government Building in Jeonju. Visitors will also be able to watch cultural performances, make newspapers, get a face painting, play quiz games and make arts and crafts such as accessories and picture frames.

More information, also available in English, can be found at http://weaja.joins.com.