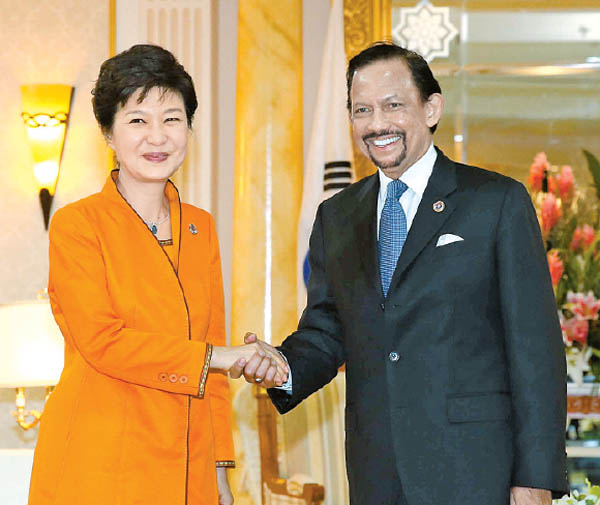 President Park Geun-hye said at a meeting with Brunei’s Sultan Hassanal Bolkiah that she would work for more business cooperation between the two countries yesterday, the first day of the Association of Southeast Asian Nations (Asean) summit. She asked the sultan to allow more Korean companies to participate in government bridge construction projects in Brunei.

“I hope the 30th anniversary of diplomatic ties between Korea and Brunei next year will be a stepping stone for the two countries to expand and develop relations further,” Park said in Brunei’s capital, Bandar Seri Begawan. The meeting of the Asean heads of state was held after leaders from the 21-member Asia-Pacific Economic Cooperation (APEC) summit ended in Bali on Tuesday.

Three major bridge construction projects are currently under way in Brunei with a combined cost estimated at about $3.36 billion. A consortium of the Korea Expressway Corp., Pyunghwa Engineering Consultants and Saman Korea, with Daelim Industrial working separately, are involved in two of the projects.

Brunei was Korea’s 53rd largest trade partner last year. Trade volume between the two countries has grown by more than 13 times, from just $160 million in 1984, the first year of diplomatic ties, to $2.1 billion last year, and the sphere of business partnerships has diversified recently into construction, agriculture and fisheries. While Korea exports mostly automobiles, steel plates and plastic goods, Brunei’s key export items to Korea include crude oil, natural gas and petrochemical products.

As leaders do at such meetings, President Park also supported Korean interests by asking the two nations to negotiate a memorandum of understanding in agriculture and fisheries. Sultan Bolkiah, in return, pressed Korea to buy liquefied natural gas from his country.

The sultan and his country have many links to Korea. On the throne for 46 years, Bolkiah has met seven Korean presidents including Park. Brunei was the first country to import Korean-made automobiles - in 1967, the year the two countries began trading goods. The cars were from the Ha Dong-hwan Car Assembly Shop, a predecessor of Ssangyong Motor.

When the sultan’s younger sister went on a worldwide goodwill tour in August 1990, she chose Korea for her first stop. The princess made headlines here, arriving in Seoul with 33 friends and relatives and seven security guards, taking over all 40 rooms at the Lotte Hotel in central Seoul.

Following the summit yesterday morning, Park joined the 10 Asean leaders, reaffirming her interest in sustaining policy and business cooperation. She then had bilateral talks with the leaders of Singapore, Australia and Myanmar.

Today, an Asean+3 meeting that includes the 10 Asean members, plus Korea, China and Japan, is scheduled. At this meeting, observers will be trying to gauge how much the absence of U.S. President Barack Obama will give China room to pursue more influence in the region. U.S. Secretary of State John Kerry is standing in for Obama, who stayed home to cope with domestic political turbulence.