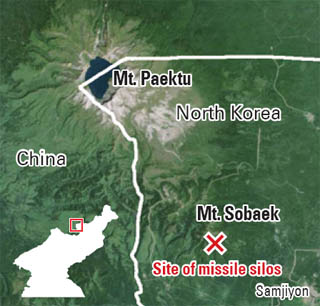 Several South Korean government sources confirmed yesterday that the North has numerous underground missile launch facilities around 2,000 meters (2,190 yards) south of Mount Paektu. The silos, they said, were constructed in the mid-2000s and were determined to have been completed recently.

“Since there are many places where the silos have been constructed, it is unclear whether all of them are launch-capable facilities or whether some are emergency facilities in case of attack,” said a government official. “Based on the size and location of the facilities, it appears that these silos are for launching mid-sized or larger missiles.”

Underground facilities at Mount Paektu add a new layer of threat atop a missile facility in Musudan-ri, North Hamgyong province, and a rocket launch site in Cholsan County, North Pyongan.

If North Korea has deployed its intermediate-range ballistic missiles, with a reach of over 3,000 kilometers, near Mount Paektu, that puts Japan’s Okinawa, where a U.S. base is located, in range, as well as Guam.

“It appears that North Korea is creating a scenario through which they can attack the South with its short-range missiles from the Pyongyang-Wonsan axis and attack Guam or Okinawa with its mid-range missiles,” said a researcher at a national research institute who requested anonymity. “Through using portable missile launchers and silos, diverse tactics have become possible.”

After North Korea was seen to have more advanced nuclear and missile technology than anticipated, Seoul in May pushed for a delay of transfer of wartime operational control of troops from the United States to South Korea from December 2015 to a later date. Concerns from the South include its ability to detect and monitor missile launches and its ability to shoot down fired missiles.

The location around Mount Paektu appears to have been chosen because of its proximity to Chinese borders, making it difficult for the United States or South Korea to attack that area.

Another source who requested anonymity said, “If the missile facility is located near Chinese borders, a missile can accidently fall into China and approaching via fighter jet will not be easy, so attacks will be difficult.”

The source added that it has not been determined where the North has hidden its 40-60 kilograms (88-132 pounds) of plutonium, an amount which can produce around 10 nuclear weapons.

If the North is concealing nuclear materials in the silos near Mount Paektu, there is danger that external attacks could lead to an eruption of the volcanic Mount Paektu, once again threatening China.