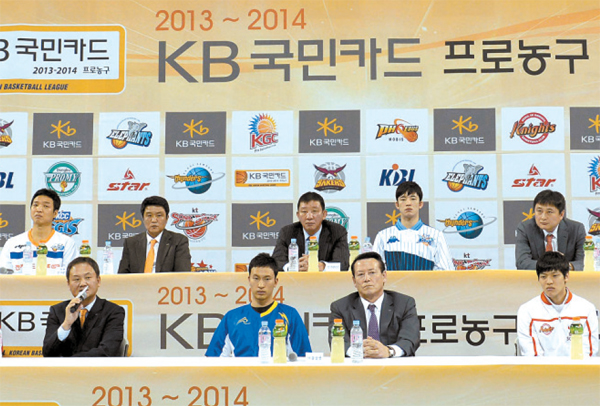 Players and coaches representing the Korea Basketball League’s 10 teams speak to the media Monday at the Seoul Student Gymnasium ahead of the 2013-14 season, which opens tomorrow.

The 2013-14 season of the KB Kookmin Card Korea Basketball League kicks off tomorrow. The official opening game, Ulsan Mobis versus Seoul Samsung, will be held at the Mobis’ home in Ulsan Dongchun Gymnasium.

The season is expected to attract more fans than ever before. Korea clinched a spot in the World Cup event hosted by the Federation of International Basketball Association for the first time in 16 years, and some big-name college graduates have joined the professional league.

The regular season continues until March 9, and each of the 10 teams will play 54 games.

The two teams who battled in last season’s KBL final - Ulsan Mobis and Seoul SK - are considered the league’s top contenders. They didn’t sign any big names but also didn’t lose any of their best players.

The Mobis, the defending champions who finished the regular season in second place under the leadership of Yoo Jae-hak, will compete for its second-straight title with Yoo’s best players, including Yang Dong-geun, the best guard in the league, and forward Ham Ji-hoon.

The Changwon LG Sakers are considered a dark horse this season. They acquired point-guard Kim Si-rae from the Mobis via a trade in the offseason and signed free agent veteran forward Moon Tae-jong. They also picked 2.07 meter (6.8 foot) center Kim Jong-gyu of Kyung Hee University in the offseason draft. Kim is considered one of the top rookie players.

The Wonju Dongbu Promy appointed “three point machine” Lee Chung-hee as their new head coach in the offseason and signed German center Herbert Hill as a free agent. They also picked guard Du Kyung-min of Kyung Hee University in the rookie draft. The Promy lost their star coach, Kang Dong-hee, who was convicted of fixing matches in return for receiving cash from illegal Internet sports betting Web site operators. They also got a new home and moved from Wonju’s Chiak Gymnasium to Wonju Sports Complex.

Analysts consider the Promy one of the league’s top four teams. “I will try to improve the team’s defense,” coach Lee said. “Good offense can sell more tickets, but good defense can bring more wins.”