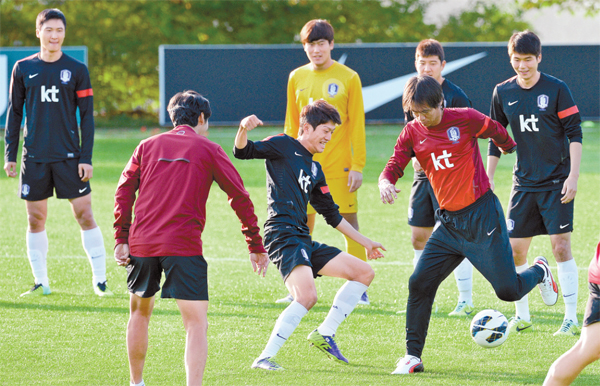 Coach Hong Myung-bo, second from right, trains with his players Wednesday in preparation for tomorrow’s match against Brazil. [NEWS1]

Coach Hong Myung-bo faces his toughest match since taking over the national team when the Taegeuk Warriors take on Brazil, the host and one of the strongest contenders of the 2014 Brazil World Cup, tomorrow. The game will be held at the Seoul World Cup Stadium in Sangam-dong, western Seoul, at 8 p.m.

Hong, who hasn’t been impressive in previous international matches, is expected to use a 4-2-3-1 formation by putting Sunderland forward Ji Dong-won as the striker, while starting “sonsation” Son Heung-min of Leverkusen on the left wing, midfielder Kim Bo-kyung of Cardiff City in the middle and Bolton Wanderers midfielder Lee Chung-yong on the right to lead the team’s offense. Ji’s teammate, Ki Sung-yueng, who came back after a controversial SNS scandal, will set the pace for the team.

Big names are expected to appear in front of Korean fans. Brazil’s head coach, Luiz Felipe Scolari, is likely to use a 4-1-4-1 - a very offensive formation. Striker Joao Alves will be on top of the offensive line, while FC Barcelona sensation Neymar will be on the left wing with Chelsea FC midfielder Oscar dos Santos and Paulinho of Tottenham Hotspur in the middle. Oscar’s teammate, Ramires, will be on the right to lead the offense. Koo’s teammate, Luiz Gustavo, will control the midfield line.

Korean fans’ focus will be on the battle between the two countries’ best talents - Son Heung-min versus Neymar. 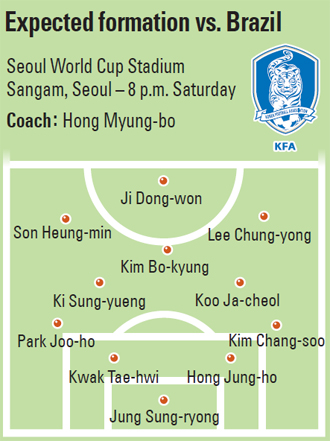 The forwards, who are both 20, have a lot in common. They were selected as the world’s top 23 teenage prospects by FIFA in December 2010. They mostly play in the left wing position, and their offensive weapons are speed and fancy dribbling. They each moved to a new team by breaking their new club’s record transfer fee. Son moved from Hamburg FC to Leverkusen for €10 million (15 billion won) and Neymar moved from Santos to FC Barcelona for €57 million. Both have scored three goals this season.

Cha, who scored 98 goals during his Bundesliga career, said, “He will score more than 100 goals in the Bundesliga,” and Pele praised Neymar by saying, “His talent far surpasses Lionel Messi and Diego Maradona of Argentina.”

Neymar is like an idol pop-star in his country and attracts many female fans. He often appears on Brazilian TV shows.

“He is a blue-chip in the Brazil commercials,” said Kim Won-hee, head of Twobe1 Management, an agency that brings Brazilian talents to the K-League Classic. “He recently signed an 11-year sponsorship contract with Nike. When he changes his hairdo, many young Brazilians change theirs as well the very next day.”

Korean fans also love to see him. In the last three days, a photo of Neymar shopping at a mall in Seoul has dominated the Internet. The Korea Football Association usually has a hard time selling tickets for international matches, but all 66,800 tickets against Brazil are sold out.

Son is also like David Beckham in Korea, but it is hard to see him in Korean TV programs as his father, Son Wung-jeong, wants him to focus on football. Adidas Korea signed a six-year contract with Son, which ends in 2018.

“This isn’t just a friendly match, at least for me,” Son said yesterday after training at the NFC center, showing his fighting spirit. Son has scored four goals in 18 A matches.

Neymar led Brazil’s win at the Confederations Cup with four goals and two assists. He was selected as the MVP of the event. “I will do my best as always,” Neymar said. “It doesn’t matter where I am.”