The Bank of Korea (BOK) yesterday lowered its economic growth outlook for 2014 to 3.8 percent from 4 percent on disappointing global economic performance, especially by emerging markets.

The revised economic forecast came after the International Monetary Fund (IMF) shaved off 0.2 percentage point from its global outlook to 3.6 percent this week, citing similar reasons.

The central bank’s outlook is 0.1 percentage point lower than the 3.9 percent forecast by the Ministry of Strategy and Finance.

“Korea has a unique economic structure where it is heavily dependent on exports,” said central bank Gov. Kim Choong-soo at a press briefing held after the BOK’s monthly monetary policy committee meeting. “Our own outlook was revised as the global economic condition is expected to be in a difficult state.”

The Korean central bank stuck to earlier projections that the global economy would be on a steady recovery path, particularly in the United States and other advanced countries.

However, it said the decision to lower the outlook for the next year was based on downward risks like the end of the U.S. Federal Reserve’s stimulus program and rising oil prices resulting from conflicts in the Middle East.

“It’s true that it’s only been a few months since we last presented our forecast [in July],” said Shin Wook, a BOK official. “However, a lot of changes and uncertainties have arisen since then.” 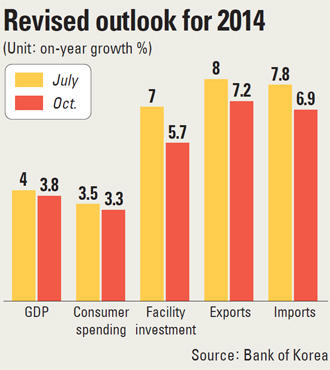 The BOK official said that up until July, the deceleration of growth in emerging markets was unexpected.

“Slowing growth in the emerging market was the main reason for the revision of our outlook,” Shin said. Because downward risks are not likely to affect the Korean economy this year, he added, the central bank believes they could outweigh positive factors next year.

The release of the minutes of the Fed’s latest meeting last month in Washington showed that most Fed policy makers wanted to start tapering the bond-purchasing program this year. However, the Fed surprised the market by not making such a move.

“Most participants viewed their economic projections as broadly consistent with a slowing in the pace of the committee’s purchase of longer-term securities this year and the completion of the program in mid-2014,” the report said.

However, the market expects Janet Yellen, who will replace Fed Chairman Ben S. Bernanke next year, to maintain the stimulus program.

The BOK report on downward risks agrees with a report released earlier by the IMF. In its report, the IMF stated, “China and a growing number of emerging-market economies are coming off cyclical peaks. Their growth rates are projected to remain much above those of the advanced economies, but below the elevated levels seen in recent years.”

In its latest revision, the central bank lowered its outlooks for consumer spending, corporate facility investment, exports and imports.

However, it did note that economic growth next year will largely be due to improvement in the domestic economy rather than exports.

Although the forecast for private-sector spending has been revised to 3.3 percent from 3.5 percent and investment to 5.7 percent from 7 percent, the central bank said in a statement that the domestic economy will show a mild recovery in 2014.

“Compared to previous years, households’ real purchasing power will likely remain at a high level as hiring continues to grow and wages are up,” the BOK said in its report.

It added that spending by lower-income households will likely improve because the government increased its welfare budgets, including child care and pensions.

The central bank speculated that the domestic economic recovery will make a larger contribution to growth than exports. Exports will see slower growth than previously expected at 7.2 percent, according to the bank, which raised its projection on the current account balance to $45 billion from $38 billion.

“We expect exports to slow down, but at the same time, imports are likely to see a sharper drop,” a BOK official said.

However, the official said the new forecast did not take into account the U.S. government shutdown and political deadlock in Washington.

“When we were making the revised outlook, the government shutdown occurred and we didn’t know at the time how long the situation would last or how much impact it would have,” Shin said. “However, if the situation continues for an extended period, it would have a huge impact on our economic growth.”

The central bank kept the outlook for this year at 2.8 percent, largely thanks to more than 3 percent growth in the second half.

Meanwhile, the central bank held the key borrowing rate at 2.5 percent for the fifth consecutive month, citing possible risks from the United States.