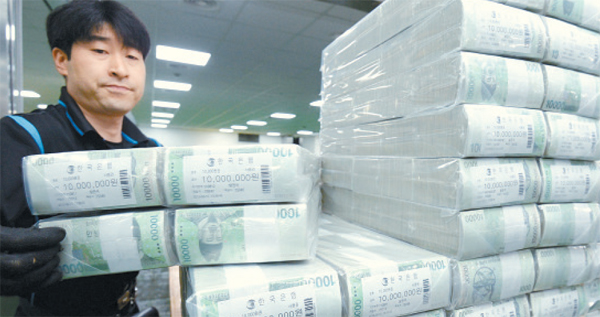 An official from a local financial institution transports a bundle of money from the Bank of Korea building last month. [JoongAng Ilbo]

Korean banks may close 2013 with their lowest profitability in four years as the rate cuts from the central bank, which meant to stimulate Asia’s fourth-biggest economy, squeeze loan margins further.

Three rate decreases by the Bank of Korea since July 2012 have left borrowing costs near a three-year low and average net interest margin for lenders, including Shinhan Financial Group, at the lowest since 2009, according to Financial Supervisory Service data.

“Rate reductions since last year have slammed into the banks’ interest margins,” said Shim Ta-ye, a Seoul-based analyst at Daewoo Securities who forecasts that the gauge will slip to an average 2.28 percent in 2013 from 2.51 percent last year at the nation’s seven biggest banks. “Loan margin will probably show mild growth from 2014 after hitting a bottom in the second half of this year.”

Accelerating economic growth next year and prospects for global rate increases are likely to lift profitability at Korea’s seven biggest banks including KB Financial Group by an average 10 basis points next year from 2013, according to four analysts surveyed. The nation’s lenders since 2011 have cut executive ranks and closed unprofitable branches to preserve profits amid tightening margins and sluggish credit demand.

Economic expansion next year is expected to accelerate to 3.9 percent from 2.7 percent in 2013, the finance ministry forecast on Sept. 26. Korea posted its slowest growth in three years in 2012.

The average net interest margin at the country’s 18 banks was 2.1 percent last year, the lowest since 2009, following the global financial crisis, FSS data show. It dropped to 1.88 percent at the end of the second quarter, resulting in a 56 percent slump in lenders’ combined net income compared with a year earlier, the data show.

The net interest margin for Southeast Asian banks averaged 4.5 percent and 2.9 percent for banks in the world’s top 20 economies, including South Korea, according to data from the companies’ latest filings.

Combined second-quarter interest income for Korean lenders stood at 18 trillion won, the lowest level since at least 2009, according to the regulator.

The time lag between adjustments on loan rates and the rates banks pay on deposits has deepened the impact of central bank rate cuts on banks’ profitability, according to Kim Jae-woo, an analyst at Samsung Securities.

Interest rates on almost 80 percent of the country’s outstanding loans are variable and adjust quarterly to reflect benchmark rates. That compares with the average 12-month term for time deposits at Korean banks, he said.

“Interest margin isn’t a factor banks can control as it’s closely tied to macroeconomic conditions,” said Kim Woo-jin, a senior researcher at the Seoul-based Korea Institute of Finance. “To Korean banks, whose revenue is heavily reliant on interest income, the low-rate environment has brought huge negatives.”

Lending accounts for about 80 percent of banks’ profit, he said. Korea’s total outstanding bank loans in July rose 4.1 percent from a year earlier to 1,129 trillion won ($1,048 billion), according to Bank of Korea data. Loans rose 3.4 percent last year to 1,099 trillion won, the slowest growth since at least 1999.

While earnings at Korean lenders remain under pressure, the Kospi index, a gauge of 51 financial stocks including Shinhan, the country’s biggest banking group by market value, and Woori Finance Holdings, has risen 3.1 percent this year. The index’s gains indicate some investor optimism for the industry’s prospects as the wider benchmark Kospi index remains little changed this year.

The net interest margin for Korean banks is likely to get a boost as the rate gap between loans and deposits narrows and the Bank of Korea raises rates along with global peers, according the analysts surveyed.

The Bank of Korea’s benchmark rate will likely rise to 2.88 percent next year, compared with 2.5 percent now, according to data. The central bank yesterday left the rate unchanged for a fifth month to bolster the country’s economic rebound.

“I’m cautiously optimistic about the Korean banking industry from the second half onward,” said Im Jeong-jae, a Seoul-based fund manager at BNP Paribas Asset Management, which oversees about $35 billion in assets. “We seem to have left the worst behind in the second quarter as far as interest margin and credit cost. Korean banks may finally see the long-waited spring breeze next year.”

The central bank’s rate cuts have also contributed to Korean household debt rising to a record 980 trillion won in June, making the prospect of higher rates a threat to the country’s economic growth as borrowers pay more to service debt when rates rise.

Swelling household debt, the biggest risk to the nation’s financial system, according to a Bank of Korea survey of 90 experts and fund managers in January, has spurred banks to boost bad-debt provisions by 10 percent to 2.7 trillion won at the end of the second quarter, further eroding earnings.

“The three core variables for banking stocks - net interest margin, credit costs and loan growth - all have shown a negative picture in the past couple of years,” Im said.

Standard Chartered, which earns about three-quarters of its profit from Asia, said in August it would take a $1 billion write down on the value of its Korean business and characterized the country as its “most difficult market.”

“Korean banks will need to accept the structural changes of a low-growth era,” said Korea Institute of Finance’s Kim. “The country no longer has the growth potential of an emerging nation like Indonesia and Malaysia. Banks need to find a way to reduce their dependence on interest income and cut back costs, which won’t be resolved overnight.” Bloomberg