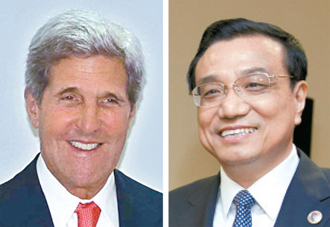 In contrast with usual practice, the Blue House kept the details of the conversations secret. “We have decided not to disclose the content and time span of the meetings,” a Blue House official said.

Park’s meeting with Kerry was the second in six months; he visited her at the Blue House in April. Kerry is standing in for President Barack Obama, who stayed in Washington to deal with the U.S. government shutdown. Following his appearance as a very junior partner at the Asia-Pacific Economic Cooperation (APEC) summit in Bali on Monday and Tuesday, Kerry again joined the chiefs of state in Brunei for the East Asia Summit.

Park and Kerry probably discussed follow-up measures to some of the agreements made between Park and Obama during her U.S. visit in May, as well as plans to refresh the Korea-U.S. alliance as it celebrates its 60th anniversary this year. The president may have also brought up the upgraded military partnership between the U.S. and Japan, a sensitive issue for a country which has little love for its former colonial master.

During his visit to Tokyo on Oct. 3, the U.S. aide promised to revise the guidelines for defense cooperation with Japan so the American military could deploy new hardware there, underscoring the development of closer defense ties between the two governments.

“Our relationship has never been stronger or better than it is today. We are continuing to adapt, however, to confront the different challenges of the 21st century,” Kerry told his Japanese counterparts. The two countries pledged to lay out a strategic road map for the next 20 years. He also offered support for Japan’s position in a dispute with China over the control of several islands. With Chinese Premier Li Keqiang, the Korean president discussed the status of bilateral free trade negotiations and follow-up measures to the economic cooperation the leaders of the two countries pledged during her visit to Beijing in June, according to sources in Brunei.