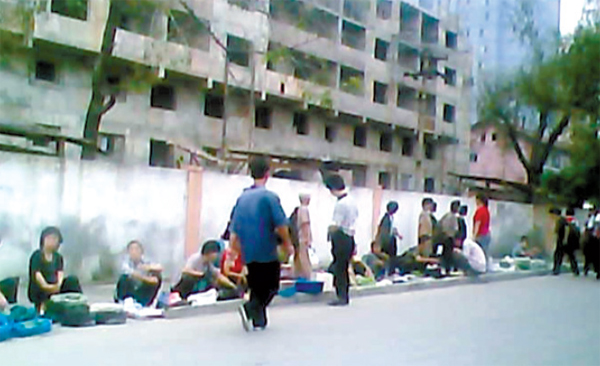 A scene at the “grasshopper market” off Yongkwang Street in Pyongyang, North Korea. Provided by a source in North Korea

At a street market behind Yongkwang Street in central Pyongyang, butchers are cutting meat for sale, and others on the scene are lighting a fire in a wood-burning stove.

So-called grasshopper markets are usually hidden near upscale areas of Pyongyang and make an ironic statement about the capitalism hidden in the Communist state of North Korea.

The JoongAng Ilbo exclusively obtained a video clip of the shadowy market on Wednesday from a source in North Korea. The clip shows a small market adjacent to the vibrant Yongkwang Street. The “grasshopper market” was named because the vendors constantly move around the city to escape scrutiny from the authorities, who ban any capitalist activities in the workers’ paradise.

The market shown in the clip appears to be located immediately behind Yongkwang Street. The vendors, who are predominately women in their 50s, 60s or 70s, display their wares of daily necessities, such as cosmetics, soap, and medicines, on the ground in front of them. There are some vegetables, possibly grown by the vendors themselves, including green onions and chili peppers. Some butchers put their meats on shelves in the open air, despite the summer heat suggested by the video clip. Smoke is coming from a wood-burning stove that appears to be used to prepare corn or bread.

“Although most products at the market are Chinese, some of them, in particular cosmetics and medicines, are made in South Korea or Japan,” the source told the JoongAng Ilbo.

In 2008, North Korea shut down a fish market in Chongjin, but an increasing number of shadowy markets continue despite control efforts by the authorities.

Right after the regime carried out a currency reform in November 2009, North Korean authorities began a heavy crackdown on the underground market economy. A group of so-called moneylords who profited from the shadowy markets reportedly protested the crackdown and it fizzled out.

“There is a legal market called Tongil Market in Pyongyang, but the cost to rent space there is very expensive,” a Ministry of Unification official in Seoul said. “Most of the spaces in the market are reserved for ‘nationally meritorious’ figures, so ordinary people just head for illegal markets.”

“More and more North Koreans regard money as their top priority in life,” said Cho Bong-hyun, a research fellow at the IBK Industrial Bank. “The illicit commercial activities in these black markets are spreading in Pyongyang and other cities.”