Koreans take to island-hopping - by bicycle

Koreans take to island-hopping - by bicycle 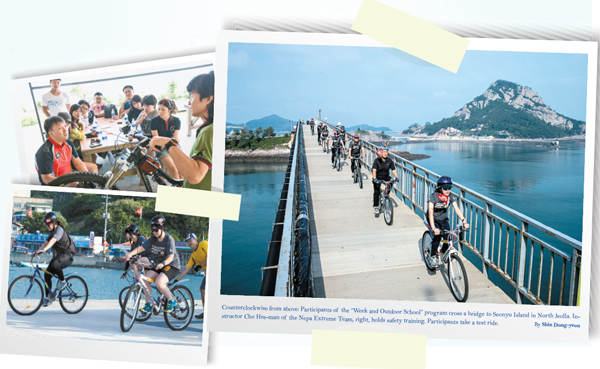 Counterclockwise from above: Participants of the “Week and Outdoor School” program cross a bridge to Seonyu Island in North Jeolla. Instructor Cho Hee-man of the Nepa Extreme Team, right, holds safety training. Participants take a test ride. By Shin Dong-yeon

Among Koreans, cycling is just as popular a leisure activity as hiking. Since many bike paths have been created in the past few years, people can ride from the Han River in Seoul to the Nakdong River, which stretches to the Yeongnam (South and North Gyeongsang) region. But there aren’t many places where people can learn how to ride a bike safely.

The “Week and Outdoor School” is a bike-riding program organized by outdoor goods manufacturer Nepa. The company recently held its third program of the year with the theme “riding a bike on an island.” In general, most island bike rides involve on- and off-road courses along the waterfront.

Beginners quickly learn one phrase that all bike riders can agree on: “Good riders don’t get injuries.” They also learn that “bicycle riding is a sport that satisfies a human’s desire to live long,” which a famous Japanese bike shop master was quoted as saying in his travel essay. Because bicycles are human powered, riders can earn an immediate payoff for their efforts. But first, they have to learn about their two-wheeled vehicles.

“You should know all the names of your bike’s parts, just like you know about your body in order to ride a bike correctly,” instructor Cho said while showing his mountain bike known as “Chumba.” He explained the name of each part and demonstrated how the bike’s saddle, or seat, can be adjusted.

“Positioning the saddle in the right spot is very basic and the most important thing to do to ride a bike safely,” he said, adding that using the pedals correctly is also important. “Many beginners often get tired easily as they try to push pedals so hard. We better try to move our legs like we are drawing a big circle softly while not moving our butt too much. Just like every other sport, maintaining correct posture is a key to riding a bike.”

Such information seems very basic, but it was useful for the beginners. Three of the nine people who participated in the program were rookies who didn’t even have their own bikes.

The basic session ended in an hour and the group eventually started its two-day program at 4 p.m. The Gogunsan Islands spread out like the spokes of a wheel, with Seonyu Island in the middle surrounded by Jangja, Daejang and Munyeo islands.

A group of 18 people, including the nine program participants and staff members from Nepa, planned to take a 10-kilometer (6.2-mile) round-trip course from Daejang Island, which is north of Gogunsan, to Jangja, where there would be a stop, then on to Seonyu, which is the halfway point, and back.

Bicyclists ride along a beach in the Gogunsan Islands in Gunsan on Sept. 6.

“Everyone please make sure to wear a helmet,” Cho said before they began their journey. “I have been riding a bike for 20 years and I had two big accidents, but this helmet saved my life for sure. You may think that you will not have any accidents like I had, but it still is the most important one to have. Please prepare gloves, sun block, and water as well.”

Everyone then checked their brakes, handlebars, tire pressure and chains and warmed up by stretching for about five minutes.

Starting from Daejang Island, the group soon reached a small concrete bridge connecting the island with Jangja Island. It felt like we were cutting through the water with our bikes as ocean currents flowed underneath the bridge. After passing the bridge, we soon reached Jangja Bridge, which connects Jangja and Seonyu islands. It’s about 100 meters (328 feet) long and shaped like a rainbow. It felt like we were moving from one cloud to another.

One of the riders, Oh Hee-soo, 20, had a hard time keeping up with the rest of the group, but she never gave up. “I want to overcome such a thing through this program to enjoy more types of outdoor activities later,” she said.

Seonyu Island is known as one of the best places in the country to ride a bike as the course follows a beautiful sandy beach, and the terrain is flat with few hills.

As we left Seonyu in the evening, the sun fell below the horizon to the west of the island, coloring the sea gold. Because such sunsets can’t be seen in a crowded city such as Seoul, the nine riders stopped to soak up the scenery.

The next day, the group decided to ride a 20-kilometer round-trip course from Daejang Island to Munyeo Island.

“Since I saw your [bike-riding] abilities yesterday, I think we can directly run to Munyeo without taking a break,” instructor Cho said. “Make sure to shift your gears before you reach an uphill and try to press down your pedals at regular intervals in an appropriate speed.”

As Cho said earlier, the riding courses didn’t have much difference in altitude, but we still needed to shift gears when we passed over the bridges connecting the islands. We then reached Munyeo soon after passing Seonyu Bridge.

As we rode about another kilometer, a small elementary school and a farm road came into view followed by a large plain, thanks to a large reclamation project.

As we approached the plain, a group of tiger swallowtails welcomed us. The butterflies were looking for honey from motherwort, and they looked like they were dancing in a group around the flowers. Because there were so many of them, they sometimes hit riders’ faces as they passed through the garden. Again, this was an experience that people can’t have in cities.

The group reached the end of the island after about an hour. There, a bridge to connect Shinsi Island and Munyeo Island was under construction.

When it is completed, people will be able to go to the Gogunsan Islands directly through the Saemangeum seawall, the world’s longest man-made dyke, measuring 33 kilometers. The government has spent nearly 2 trillion won ($1.87 billion) on construction of the dyke so far and is expected to spend about 1.5 trillion won more.

The northern region of Munyeo was quiet and it was hard to find many people or tourists there. On our way back, dozens of butterflies bid us a beautiful good-bye. 