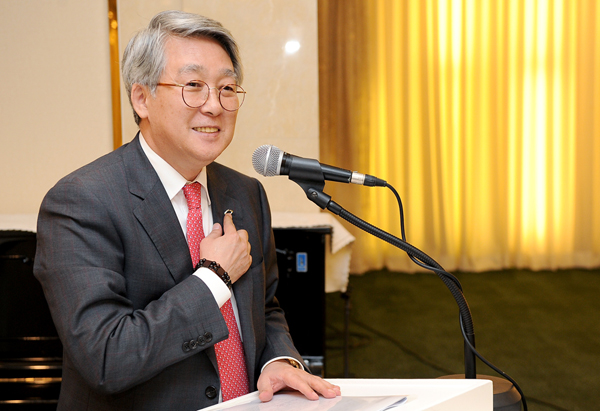 Renault Samsung Motors Vice President Park Dong-hoon, who is in charge of the company’s sales and marketing, said RSM will be the only auto brand in Korea to compete against Hyundai and Kia.

Park, who was managing director and CEO of Volkswagen Korea, made a surprise move to the local automaker last month.

The 61-year-old had a reputation in the imported car industry and served as chairman of the Korea Automobile Importers and Distributors Association (Kaida) from 2005 to last year. During his tenure at Volkswagen Korea, its sales rose by an astonishing 1,125 percent from 2005 (1,635 units) to 2012 (18,395 units).

“I think I have done my job fully at Volkswagen,” Park said at a press meeting at AW Convention Center in Seoul on Thursday night. “Renault Samsung once took first place and to reclaim that status is my reason to move here.”

RSM has shown signs of recovery since Park took the job last month. Its domestic sales in September were 4,958 units, up 23.8 percent from a year earlier, and enough to pull ahead of Ssangyong Motor, which sold 4,432 units last month. It was the first time this year that RSM beat Ssangyong in monthly domestic sales.

Park said his first move at RSM was to get out of his office and visit the sales network. He said the sales and marketing unit will focus on sales of the QM3, the compact SUV that is expected to be introduced next month, and the SM7, its flagship sedan, while also boosting sales of its vehicles used as taxis.

“I noticed that the company’s taxi sales process is weak,” Park said. “We will set up a new sales plan for taxis.”

However, Park said that he will not change RSM’s sales network to be like those of imported cars, which rely on dealerships.

“What’s important is to increase the efficiency of our existing network since both dealers and direct sales branches have gone through hard times,” he said. “If the performance of our sales branch is poor, we can consider changing it to a dealership, but I have no intention to make our sales system like those of imported cars.” Dealerships are run by individuals or separate companies, not by the manufacturer.

As for rising sales of imported cars in Korea, Park said there will be a slowdown in the future. He said that the current trend of soaring imported cars sales can be explained by the introduction of smaller models, but a weak point is that the price of small foreign cars is still high.

Park, who has been in the car business since 1989, said Korean cars are now more marketable than Japanese cars.

Although German cars are popular these days because they give a different feeling from domestic cars, he believes the competitiveness of the Korean auto industry is strong and that RSM will play a pivotal role.