Soccer is savior for rural school

Soccer is savior for rural school 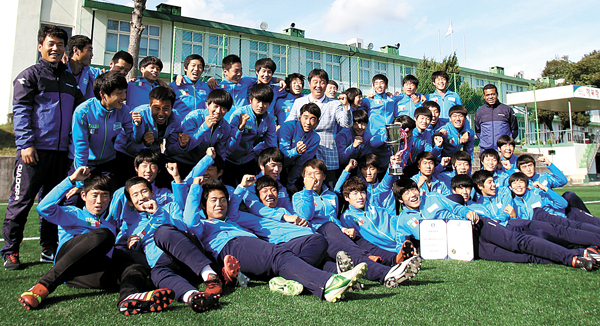 The high school division players of the Hoengseong FC youth soccer team pose in front of Gapcheon High School with the school’s director, Lee Ki-keun, at center. The team won the Gangwon regional soccer league championship on Sept. 28. Provided by the soccer team

When the Hoengseong FC youth soccer team won the Gangwon regional soccer league title on Sept. 28 after years of hovering in the middle ranks and then moved on to national championship play, the manager, Lee Ki-keun, was speechless.

“My boys aren’t elites,” said Kim, 47, a former member of the national soccer team. “They have felt the sting of rejection from other soccer clubs, and joining Hoengseong FC was their silver lining.” Kim explained that “soccer elites” usually play for the best soccer clubs from early childhood.

Hoengseong FC was established in 2008 at the Gapcheon middle and high schools in Hoengseong County in a desperate effort to raise the dwindling number of new students at the school. The school suffered a considerable drop in enrolment after the Hoengseong Dam was built in 2000, submerging five adjacent villages.

School officials were discussing whether they would have to close down after only a single student applied in 2008 for entry to the schools, which had a total enrolment of 140 at the time. They seized on the idea of sponsoring a soccer club for boys of middle- and high-school age. Recruitment notices made headlines in area newspapers, and the dice was rolled.

Within a month, 37 new student athletes from all over the country applied for admission to the schools. The soccer club now has 87 members.

“You look around here and you see nothing harmful for the kids,” Kim said. “No pubs, no motels, no PC rooms - absolutely nothing.” That environment, he added, makes his job of encouraging players to concentrate on soccer much easier.

But at a school located 130 kilometers (80 miles) southwest of Seoul, it was more than the remote area that recently led the team filled with “non-elites” to victory. Teamwork and sheer enthusiasm for the sport were the cornerstones.

“I spend a lot of time talking with the boys, just athlete-to-athlete,” Kim said. “I explain to them why they should work as a team and let go of their egos on the field.” Kim calls this a “creative strategy” because the process of mutual understanding allows the members to feel comfortable on the team, which leads to better performance in the games.

Creative strategy, according to Kim, means swiftly adapting to opportunities on the field.

“Practice games never match the real thing,” said Kim, which is why players should be able to think out of the box to counter unexpected moves by the opponents. Many coaches in Korea use both physical and verbal abuse to keep team members from slacking off, the coach said, but he chose the carrot over the stick for his team.

Park Jong-hyun, 18, a member of Hoengseong FC, testified to the success of the so-called creative strategy. “Manager Kim and the coaches aren’t bossy,” he said. “That helps us build a stronger bond as a team because we’re not playing psychological warfare.”

The newly crowned league champions fared reasonably well in the national tournament involving 64 teams. They progressed to the round of 16, but their loss there didn’t faze Kim.

He said his next goal was not necessarily to finish higher in the nationals; in fact, his ambitions have nothing to do with records.

“Students at prestigious schools make great athletes,” he said. “But it never has been the other way around.” In other words, Kim wants to train soccer stars who can also excel in academic studies, not just on the field.

“They all want to turn professional,” said Kim, referring to the members in the Hoengseong FC, “but the number of spots is limited.”

“Later, when some of my boys face that dead end, I want them to have alternatives.” Kim hopes that keeping up with school studies will open more doors for his players in other fields.