Wait is over for violinist’s loyal fans

Wait is over for violinist’s loyal fans 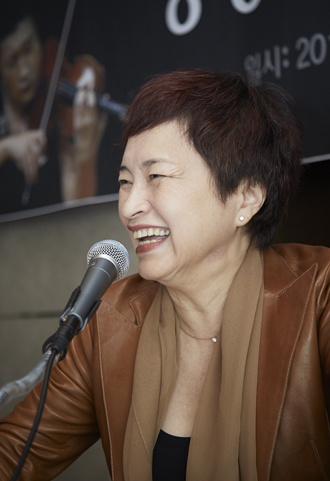 Chung Kyung-wha said her finger still bothers her but is about 75 percent recovered. Provided by KCMI

The charisma of a “lioness on stage” has weakened, but the passion that swung the bow hasn’t cooled down. Chung Kyung-wha, the violinist who wasn’t able to touch the instrument for about five years after a finger injury, again experienced standing in front of an audience and called it a miracle. Her Asian tour, “Beyond Expectations,” has come to Korea after dates in Japan, and will continue in China thereafter. She thanked her fans for waiting so long for her return.

“I think of every stage as my first and last stage. The difference in my age might show in the auditorium, but I am that little girl who fell in love with her fans in 1958 when I performed at the Myeongdong National Theater. Now I feel the love of grandchildren and grandparents.”

She was moved by the dedication of those fans in her four-city tour in Japan, including Tokyo and Fukuoka, in June. They waited for her comeback despite her long absence from the stage, and she had to prepare 20 encore numbers to handle audience demands for more of her music.

She is also getting ready for the last leg of her tour, which will include performances in seven cities in greater China, including Beijing, Macao and Hong Kong.

“The Chinese call me ‘Zheng Jing He’. They might wonder what it is like to have a grandmother visiting them, but I don’t hate to be called ‘grandmother.’ My comeback concert in England will also take place next year, and I feel solid because of my fans that have grown old with me. I am merely a messenger who digests and presents what the composer wanted me to. I’m doing my best with technique, and I’m still walking along in the depths of the music.”

The stubborn Chung Kyung-wha who used to quarrel with her conductor has vanished. Instead, the principles of music that she has kept her entire life lingers in her. She also didn’t forget to thank Kevin Kenner, her pianist, whom she met at the Great Mountains Music Festival in 2011.

“He is like an angel who is humble and pure. He flies to me every month and we are building up our repertoire together. We will present the best music that we have looked at for three years,” she said.

For the Korea tour program, which starts in Ulsan and then Goyang, Seoul and Busan, she chose the sonatas of Beethoven, Grieg and Faure and “Fantasy” by Schubert.

“We will perform Beethoven’s Sonata No. 5, ‘Spring,’ even if it’s fall. Faure wrote his Sonata No. 1 with hope and dreams when he started his career as a 24-year-old man.”

For Chung, who is setting forth again as a soloist, spring, with its hopes and dreams, is now.