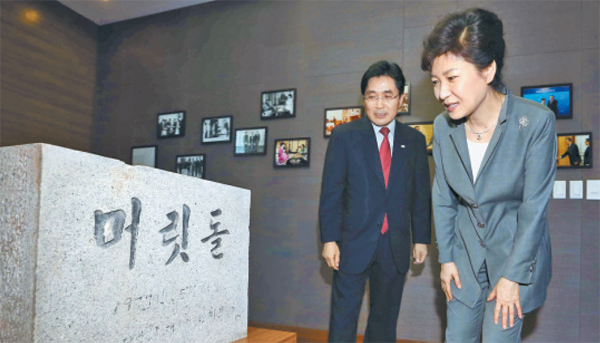 President Park Geun-hye looks at a cornerstone engraved with calligraphy by her father, former President Park Chung Hee, at a celebration of the completion of the Korean Embassy’s new building in Jakarta yesterday. [NEWSIS]

President Park Geun-hye continued her sales diplomacy as she kicked off a three-day state visit to Jakarta, the last leg of her three-stop Southeast Asia trip.

Park said at a roundtable meeting with Korean and Indonesian business leaders yesterday that expanding bilateral trade volume to $100 billion by 2020 must be supported by institutional groundwork. She pointed to the negotiations now going on for a comprehensive economic partnership agreement as one of the ways governments could support their business communities.

This “comprehensive economic partnership agreement” is the equivalent of a free trade agreement and has been under negotiation between Indonesia and Korea since March 2012. The fifth round of talks was held in Seoul last month.

“This is the time for concrete action to realize our joint goals,” Park said at a business luncheon at the Grand Hyatt Jakarta, hosted by the Indonesian Chamber of Commerce and Industry. Guests included her 150-strong business delegation, including Minister of Trade, Industry and Energy Yoon Sang-jick and Korea Chamber of Commerce and Industry Chairman Park Yong-man. The Indonesian delegation included about 100 people.

At the Korea-Indonesia Business Investment Forum, participants discussed ways Korea could expand investment and participate in infrastructure projects in Indonesia and elsewhere in the region; they also talked about how to ease the difficulties of Korean firms operating in Indonesia.

Trade volume between Korea and Indonesia is over $30 billion, triple the figure of 2007. Korea is Indonesia’s seventh-largest trading partner.

The two countries also signed seven memorandums of understanding at the forum, including documents on energy and the development of coal-bed methane.

After arriving in Jakarta late Thursday, Park yesterday attended a ceremony celebrating the completion of the new Korean Embassy building in Jakarta and visited Daewoo Shipbuilding and Marine Engineering’s center, giving congratulatory remarks to the workers there.

In 2011, Daewoo Shipbuilding signed a $1.1 billion contract to deliver three 1,400-ton submarines to Indonesia by 2018, and Korea sees great potential in the expanding Indonesian defense market.

In an interview with Kompas, the Indonesian daily, yesterday, Park said that a comprehensive economic partnership agreement would bolster expanding trade between the countries and further advance the two countries’ relations.

She also called for an advancement in the defense industries of the two countries, pointing to Daewoo Shipbuilding’s engineering center as an “exemplary case of technology transfer and mutual cooperation.”