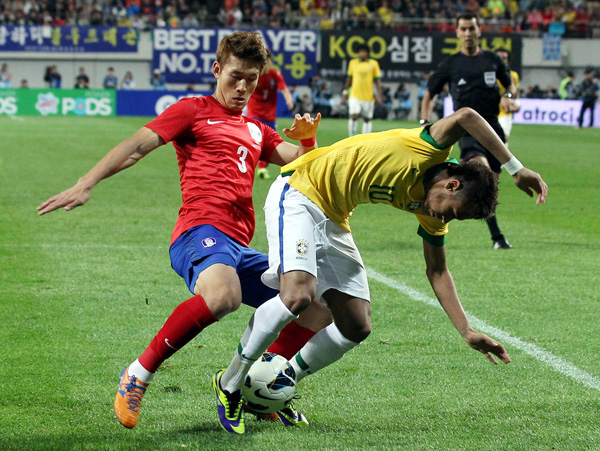 The Taeguk Warriors learned a painful football lesson from Brazil in Saturday’s friendly match as the Brazilians blanked Korea 2-0.

Head coach Hong Myung-bo’s squad tried to take control of the game by aggressively charging its opponent in the midfield, but Brazil emasculated such attempts with high-quality passes and their superior ball-control skills.

The Korea Football Association had to pay $3 million to invite the hosts of the 2014 FIFA World Cup to Seoul. The most expensive tickets for the match were 200,000 won ($187) and the cheapest were 30,000 won - in comparison, the average ticket for a K-League Classic match is 10,000 won - but, despite the loss, the game was worth it. Coach Hong gained valuable insights about what the Korea team needs to improve upon, and the 60,000 fans gathered at Seoul World Cup Stadium enjoyed a high-quality game.

With a 4-2-3-1 formation, Hong put Sunderland forward Ji Dong-won on the top of the offensive line, while placing three European leaguers in the attacking midfield - Kim Bo-kyung, Koo Ja-cheol and Lee Chung-yong. Midfielders Ki Sung-yueng and Han Kuk-young were placed in front of the four defenders.

The team’s best talent, Son Heung-min, did not start.

No matter the formation, the Korea team spent most of its time pressing and defending the Brazilians. Ki and Han aggressively pressed the Brazil’s core attacker, Neymar, with help from the three attacking midfielders. Each time Neymar possessed the ball, multiple Korean defenders surrounded him and physically challenged him, sometimes with dangerous tackles.

Brazil seemed a bit embarrassed by such aggressiveness, but Brazil was Brazil. Attackers Oscar and Hulk penetrated into Korea’s empty spaces effectively and Neymar escaped the Korean defenders several times with his fancy dribbling. Such attacks drew three yellow cards from the Koreans in the match.

The first goal came in the 42nd minute in a free kick situation. About 25 meters (82 feet) from the goal, Neymar put the ball into the upper-right corner of the net with his right foot. 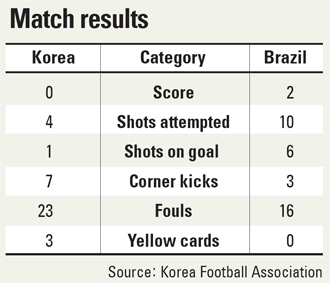 Brazil’s head coach Luiz Felipe Scolari made an early change in the second half, replacing Hulk with Chelsea midfielder Ramires, who has better speed and dribbling skills, which quickly resulted in the second goal. Midfielder Oscar escaped Korea’s offside trap to give himself a one-on-one showdown against goalkeeper Jung Sung-ryong, which he put in the net in the 49th minute.

Hong finally put in Son Heung-min of Leverkusen in the 74th minute, but Son was lethargic and received no good passes.

“The biggest worry for Hong is that he still can’t find a decent striker,” said football analyst Han Hun-hee. “I think Hong should now consider placing Son as a striker rather putting him as a left winger.”