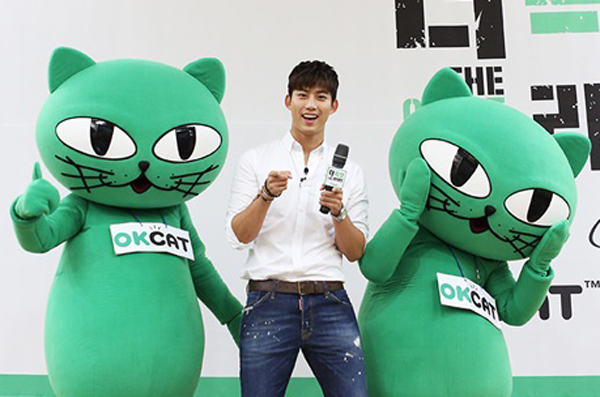 Ok Taecyeon, from the K-pop group 2PM, has added CEO to his resume as of Friday. The boy band member known for his killer abs held a press event at COEX mall in southern Seoul for the launch of his character “Ok Cat.”

During the press event, Ok explained that the new venture came from his habit of doodling cat characters. He decided to mix business and pleasure and is launching a line of products using the goofy green image of Ok Cat.

After giving a presentation on what he wanted to do with the brand, Ok took the time to sign autographs and sing the “Ok Cat Song” for fans who attended the event.

“I’m stoked to be able to present Ok Cats to my fans,” said Ok, adding that he’d do his best to further develop the brand.

With his cat character launched, Ok is going to help boost veteran singer Cho Yong-pil’s popularity in Japan. On Wednesday, Cho’s new album will be released there, and Ok is a featured singer on the title track “Hello.”

While the Korean version of the song featured rapper Verbal Jint, Ok was chosen to sing the Japanese version due to his following there. Before its release, Ok said he was ecstatic to help a legendary singer like Cho.