Rice imports are coming to Korea

Rice imports are coming to Korea

A farmer harvesting rice from his paddy in Sejong, South Chungcheong, yesterday. [NEWSIS]

Kwon Hyeok-jin, a 60-year-old farmer working his 33 hectares (81.5 acres) of rice paddys in Seosan, South Chungcheong, releases a sigh. He’s worried about his rising debt, even though this year produced a bumper crop.

“I heard from next year the rice market will be opened to foreigners,” Kwon said. “Prices will plunge while my debt level is on the rise.” He sighs again. “I don’t know what the government is going to do for farmers like me.”

In about a year, the Korean rice market will be opened wide as the postponement of tariffication for agricultural products is scheduled to end by 2014. Tariffication is a piece of trade negotiation jargon that refers to a process in which all existing non-tariff barriers (NTBs) are converted into “bound” tariffs - import taxes with a ceiling - and the reduction of those tariffs over time.

In concert with the freeing up of the market, the Korean government is planning to come up with measures to protect domestic rice farmers, by the end of the year at the latest.

According to World Trade Organization guidelines, the government should make public whether tariffication will begin or not by the end of September 2014.

Agriculture Minister Lee Dong-phil said Sept. 11, “The government hasn’t yet decided, but we think that there are some advantages for Korea to allow the tariffication.” But farmers and their unions are deeply worried about the fate of the domestic rice industry.

In reality, many Koreans are already consuming imported rice products, although they may not realize it. A minimum market access provision has required Korea to import a certain amount of rice from outside the country as it postponed tariffication.

Korea had to buy a total of 368,000 tons of foreign rice last year. Thirty percent, or 110,400 tons, was distributed to domestic retailers. Imported rice usually goes first to public auctions. Cafeterias at corporations and temporary canteens at construction sites are major participants in the auctions.

Few Koreans would want to eat foreign rice at home or in a restaurant, although some restaurants might be sourcing rice from the auctions.

It is not illegal to use imported rice, but it is illegal not to indicate the country of origin.

The remaining 70 percent of the imported rice is being used industrially to manufacture confectionery and red pepper paste.

Korea was forced to start importing rice in 1995 after the government agreed in the 1993 Uruguay Round meeting to gradually increase its annual rice imports in exchange for lengthening the postponement of tariffication. As long as the country is a member of the WTO, it must choose either tariffication or mandatory imports. Korea’s rice imports surged to 205,000 tons in 2004 from 51,000 tons in 1995. At the time, all of the imported rice was used industrially.

The government had another round of negotiations with the WTO to extend the delay until 2014. So the country has had to increase the import volume by 20,000 tons every year. Due to the recent extension, the country’s total rice imports are expected to hit 388,000 tons by the end of this year and 409,000 tons next year. 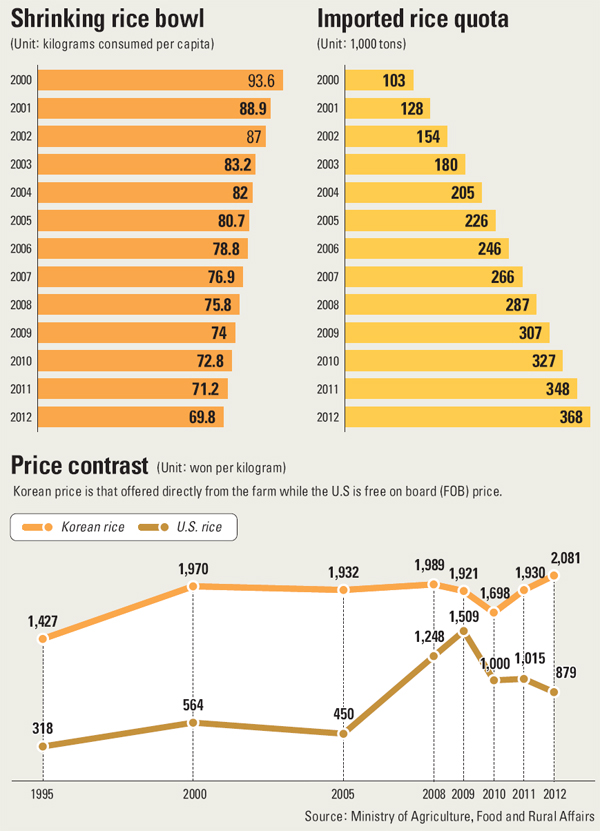 In a nutshell, the country has been avoiding bringing in foreign rice by postponing tariffication for the past two decades. But in fact it has been importing and consuming more and more foreign rice.

Now the government is having this headache a year ahead of the start of tariffication. Even after it starts importing rice from other countries by imposing tariffs, it still will have to keep a mandatory amount of rice imports at a tariff rate as low as 5 percent. Since consumption of domestically produced rice has been declining from 93.6 kilograms (206 pounds) per head in 2000 to 69.8 kilograms last year, there are increasing worries about further falls in sales of home-grown rice if imported rice with such lower tariffs hits the market.

The government has been putting off importing rice because of the backlash that’s guaranteed from farmers.

“Tariffication can be seen as opening the rice market fully to foreign rice, so it was too risky for the Agriculture Ministry in a political sense,” said an official at the agriculture ministry.

How the Korean rice market will change is up to the government’s bargaining power in negotiations with the WTO on tariff rates for foreign rice. Korean trade analysts says an appropriate level should be above 400 percent based on the WTO agricultural agreement. Meanwhile, rice exporters with WTO membership argue that an appropriate tariff rate is between 150 and 200 percent.

The government has two possible choices: Either impose tariffs and embrace foreign rice or extend the postponement again. But due to WTO rules, the latter choice can only go until 2015. Among WTO members, Korea and the Philippines are the only two countries to have not opened their rice markets to the world.

“After Japan opened its market in 1999, it is enjoying benefits from exporting its high-quality rice to Southeast Asian countries,” said Kim Tae-gon, a research fellow at Korea Rural Economic Institute.

“Since Japan prepared for tariffication of rice very early, it is not seeing any problems now,” said Cho Il-hyun, a former lawmaker at Democratic Party.