Jockey rides her way to career as trainer

Jockey rides her way to career as trainer 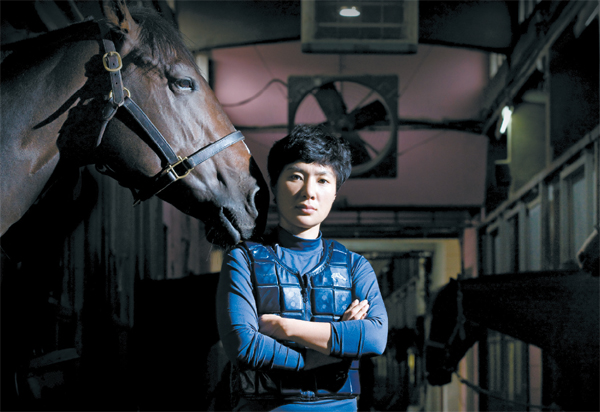 Lee Sin-young, the first female horse trainer in Korea and Asia, is in charge of stable No. 14 at Seoul Race Park. By Kwon Hyuk-jae

Before every race, Lee Sin-young’s stomach is racked with stress-induced pain.

With a gunshot, the starting gates open and the pain subsides. For about 2 minutes, Lee gets lost in a nerve-racking horse race, which she calls pleasant stress.

Lee, the first female horse trainer in Korea and Asia, is in charge of horse stable No. 14 at Seoul Race Park.

Lee, 33, began jockey school in 1999 and became Korea’s first female jockey in 2001. For a woman, taking part in the nation’s large-scale horse races was an honor. “The first” comes in front of her name a lot. She successfully completed her trainer’s license exam in April 2011.

The dictionary describes a horse trainer as “a person who trains horses.” But horse training is less than one-tenth of a trainer’s job. The trainer manages and takes full responsibility for the horses after they are consigned to the owners. Trainers check for injuries and nutritive conditions, choose a jockey and plans strategies for races. The word “director” describes the job better than “trainer.”

This is Lee’s third year as a trainer. There are 53 trainers at Seoul Race Park. She is competing against another trainer, Park Dae-heung, 55, for the most number of wins this season. Lee has 37 winners from 201 rides, while Park has 38 winners from 260 rides. She’s young, successfully directing older groomers and producing results, pushing aside senior trainers who have 10 to 30 years of experience. If this was professional baseball, it would be like a team contending for a championship led by the sport’s first female coach with only three years of experience.

On the day of her interview with the JoongAng Ilbo last month, Lee, who is 158 centimeters (5.2 feet) tall and weighs 56 kilograms (123.5 pounds), had short hair and wore no makeup. When she was asked about that, she asked whether makeup is a must for interviews. She said she goes to work without washing her face or hair in the morning.

Lee’s day starts early. She wakes up at 4:30 a.m., when it’s still dark. By 5 a.m., she begins checking the horses one by one. For racehorses, trainings at dawn are the most important hour. Trainers seldom ride the horses, leaving that task to grooms or jockeys. But Lee said there is no reason not to when she has the right skill, adding that she can do a better job of explaining the horses’ condition to the owners after riding them.

When the trainings are over at about 10 a.m., Lee washes her face in the corner of the stable where the horses are washed. She calls it her dressing table.

Her hair is always short. “I don’t know where the comb is in my house. I wash my hair and dry it with an electric fan.” She occasionally brushes a horse’s mane, but not her own hair, and she finds the smell of horses more fragrant than expensive perfumes.

There are 10 people in stable No. 14. Lee was the youngest member until last year, and now she is the boss. Seven out of nine grooms are older than she is and they have been there longer. Learning a horse’s nature and management method takes time, making it difficult for a new trainer to keep up.

Lee rides and checks the condition of horses by herself because she used to be a jockey.

Lee and her teammates also had to figure out a way to communicate with each other in a country in which juniors address their seniors in a honorific way.

“At first I was worried about working under a woman and many people opposed. In fact, I’m older than her and she used to call me ‘oppa’ (older brother).

“Calling her ‘trainer’ was awkward at first, but now it is more than fine,” said Jeong Jae-young, one of the grooms. “She is tougher than the guys and doesn’t talk about trivial matters. She has charisma that makes someone do things without her speaking.”

When she took the helm of her team, Lee also made up her mind to be different in order to work with grooms and jockeys who are all older than she is.

“When I was a jockey, the trainers were treating the jockeys and grooms badly. I hated that more than the work itself,” Lee said. “A groom is someone’s father and they are important people in our field. I felt bad when a lot of them thought of themselves as unworthy. I try hard to make them work with self-esteem.”

Even though Lee is young, she has been praised for her thorough organizational management.

“I set one of the grooms as a team leader and left him to lead and take responsibility for the whole stable. I hand things over to him even when there is staff who wants to talk to me directly,” boasted Lee.

“When there is a problem, I just let the team leader handle it. Then things go greater than I expected. I’m sure there is no team like ours with strong unity.”

Looking back on her time as a jockey, there are more painful memories than joyful ones. She won 100 races (90 wins in 895 races), but quit as soon as she passed the horse trainer’s test.

In 2006, Lee injured her spine, rib and nasal bone when the horse she was riding broke one of its legs during a race in 2006. After two months of hospitalization she still wanted to ride again, so she got back on the horses, but then suffered another injury.

Lee said she forgot about the pain shortly after the injury but she often has difficulty dealing with the looks she gets from people. Some whispered “anyone could have won on that horse” when she won. When she wasn’t ranked, people criticized her for getting behind because she was a woman.

It was the same when she started as a trainer.

“When I was a jockey, I was confident to win the race. But it was exactly opposite when I started as a trainer. I wondered if there would be any groom who will help me or if there is an owner to trust me with a horse.”

Lee was rough and wanted to win, and she was known as a fighter when she was a jockey. She spoke honestly when she felt there was injustice. Some encouraged her, but others excluded her for being too tough.

“Trainers are partners and rivals at the same time. I was welcomed by few people. Then there was one horse owner that offered help. It was difficult at first but when I think back now, it is better. Some colleagues walk on eggshells because of (competition with) senior trainers but I can race without those. I can just focus on myself,” Lee said.

Lee sometimes still faces unfair criticism. Some say she trains all the expensive horses because she is favored by horse owners. The same critics also say it is impossible not to win a race with such horses.

The sarcastic remarks are half right and half wrong. Stable No.14 is known as “Real Madrid” (the best football club in Spain) in Seoul Race Park. Among the park’s 53 stables, the average price of the horses in No. 14 is the highest at 58 million won ($50,434) for 29 racehorses. The stable’s most valuable horse, Geuma Phoenix, is worth 290 million won.

“I expected her to do better than decent male trainers with great competitiveness. I know I wasn’t wrong when I see her directing the grooms,” said Kang Gyun-ho, a horse owner who entrusted Lee with four horses as soon as she became a trainer. Not only individual owners but corporate owners have trusted her with their horses.

“Lee stands out in communication. There were some trainers who were disturbed when the owners asked questions. But Lee explains clearly how to raise the horses and about the aim,” said Park Jong-bae, a public relations team official at the Korea Racing Authority.

“In fact, the owners are very important in horse racing. Lee is a pioneer who is making a new culture in Korean horse racing. She treats owners appropriately and thinks on the strategy together,” added Park.

The atmosphere of Seoul Race Park, where trainers with good results had to endure criticism from others, is transforming with the advent of new trainers like Lee, who think it isn’t always necessary to be humble when you win.

Even on her holidays, she flies down to Jeju Island twice a month to check if there’s a good horse. “When I was a jockey I was weaker than I expected,” Lee said.

“But these days, I’m nervous to see things go well when I’m not that good. I want to set my foot deeply so that I can overcome any crisis by leading the team.”

She even goes to graduate school. “I want to work as a trainer until I retire but at the same time, I want to prepare myself for another challenge. I want to work in a relevant field or teach about my experience as the horse industry is growing,” Lee said of her plans.

“I want to get married but not for now since it will interfere with my work. The work itself is fun and I like having a conversation about horses with the owners.”