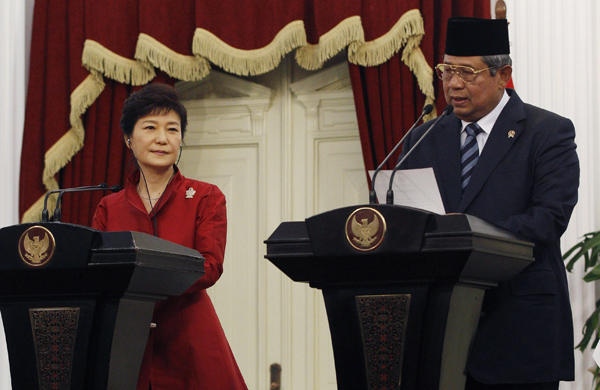 President Park Geun-hye successfully wrapped up her state visits to Brunei and Indonesia, obtaining two big accomplishments: the stern opposition of Chinese President Xi Jinping to North Korea’s nuclear program and an agreement with the Indonesian president to expand trade.

Park returned to Korea yesterday after her eight-day trip to a series of international events, including APEC, Asean+3 and EAS meetings, and the visit to Indonesia. She had eight bilateral meetings with Xi on the sidelines of the summits.

One of her achievements during the trip was Indonesian President Susilo Bambang Yudhoyono’s commitment to conclude negotiations on the Comprehensive Economic Partnership Agreement (CEPA) this year.

The CEPA is intended to boost trade and strengthen overall economic cooperation.

South Korea and Indonesia began negotiations on the CEPA in July 2012, but there has been little progress since then.

If the CEPA is signed, bilateral economic interactions are expected to increase dramatically. Indonesia has the largest population (250 million) and the biggest economy ($920 billion gross domestic product annually) of the 10 Asean countries.

At the bilateral talks Saturday, the presidents agreed to increase trade to $50 billion annually by 2015 and $100 billion by 2020. Korea-Indonesia trade was about $30 billion last year, the highest of any two Asean countries.

On Saturday, monetary ministers and chiefs of the central banks of the two countries also met in Washington, D.C., and signed an agreement for a $10 billion currency swap. Unlike other currency swap deals aimed to assist countries in case of financial crisises, the agreement focuses on using Korean won in bilateral trade, rather than U.S. dollars.

Apart from economic negotiations, she also made diplomatic progress. The joint declaration issued at the APEC summit on Tuesday reflected several things Park called for during the meeting, such as the “standstill commitment” not to institute new

Members of the international associations also showed their support for Park’s “trust-building process” in dealing with North Korea.

Xi’s comment appeared to be stronger than his remarks at the first Korea-China summit under the Park administration on June 27.

At the time, Xi said North Korea’s nuclear weapons were “a serious threat” to regional peace and stability.

Park also had a dialogue with the Indonesian president and his wife, whose father was a former Indonesian ambassador to Korea.

In the late 1970s, when First Lady Ani Bambang Yudhoyono was living in Seoul, the future Indonesian president, who was then courting her, visited Korea to see her.

Park asked the Indonesian leader, “Were you happy with your romance in Korea?”

“I was moved by the dynamic spirit and independence of the Korean people at the time,” he said. “And my wife sent me lots of letters [describing Korea], so I felt as if I had already visited Mount Sorak and Panmunjom.”