Match vs. Mali a ‘must win,’ coach says

Match vs. Mali a ‘must win,’ coach says 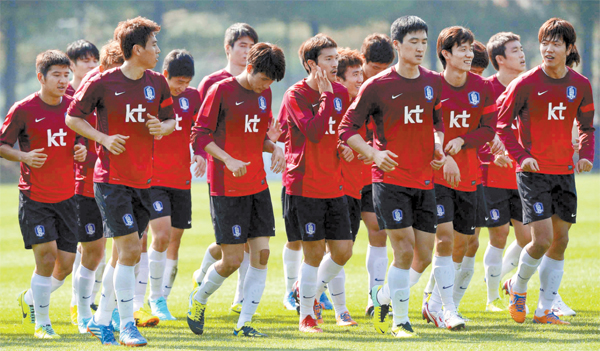 The Taegeuk Warriors prepare for a friendly match against Mali at the National Football Center in Paju, Gyeonggi, yesterday. [NEWSIS]

The Korean national football team, which had a tough time against Brazil on Saturday night, will face Mali tonight. Head coach Hong Myung-bo said the team will focus much more on offense than it did against the Brazilians as the biggest goal of the match is ending Korea’s three-game losing streak in A-matches - international matches between national teams whose results are not included in FIFA rankings.

The national team had a short training session at the National Football Center in Paju, Gyeonggi, before it headed to Cheonan, South Chungcheong, where the match will be held at 8 p.m. Hong said the starting lineup that he used against Brazil will not change that much against Mali, but the team will include mostly offensive players.

“The game score was bad against Brazil,” Hong said. “But since the players experienced many positive things, the biggest goal of the match against Mali is winning the game to boost our confidence.”

Hong used to say that he cared more about how the team played in a game rather than game scores, but expressed a strong desire for a victory.

After the Brazil match, Hong said he is satisfied with the team’s defense, although it allowed two goals - one on superstar Neymar’s free kick and one by Chelsea midfielder Oscar - because his defenders and midfielders cut incoming passes and aggressively pressed their opponents.

And because the team was able to build a stable defense against one of the strongest 2014 FIFA World Cup contenders, Hong said it is time to produce good results that can satisfy fans who are tired of seeing a series of losing games.

“We need to improve the accuracy of our passes, especially in the opponent’s goal areas,” Hong said. “And all players also need to improve their ball-keeping skills because it is the first and very basic step to make an effective offense.”

When reporters asked whether he will start Son Heung-min, who only played 26 minutes in the second half against Brazil, Hong said, “The team doesn’t exist for him, he plays for the team. But I’m trying to provide the best plan that can utilize our players most effectively to win this game.

“I am satisfied with the team’s defense as midfielders Ki Sung-yueng and Han Kuk-young led the defense in the midfield area successfully, but it doesn’t guarantee that it will work out against Mali. There is a possibility that the defense will have problems in the game because we will focus on scoring many goals rather than trying to not allow goals. In general, we need to improve ourselves in every game.”

This is the first time that the Taegeuk Warriors will face Mali, and they seem confident that they will win the game, but there are some big names that the national team shouldn’t underestimate. Midfielder Seydou Keita of Dairen FC in China used to play for Spain’s FC Barcelona. He scored 23 goals in 84 A-matches.

Among Mali’s defenders, Adama Tamboura has caught the eyes of Korean fans. In the 2004 Olympics in Athens, Korea had a 3-3 draw against Mali in the Group A qualification round. Mali led the game, 3-2, until the 63rd minute, but Tamboura helped Korea with an own goal that he made with a header when forward Choi Sung-kuk made a cross in the 64th minute. As the match finished 3-3, Korea advanced to the Olympic quarterfinals for the first time in 46 years. Tamboura now plays for Randers FC in Denmark and has played 64 A-matches.

“Forwards of the team, including myself, feel responsible that we have not scored many goals in recent A-matches,” forward Lee Keun-ho said yesterday. “We will try to take as many chances as we can.”