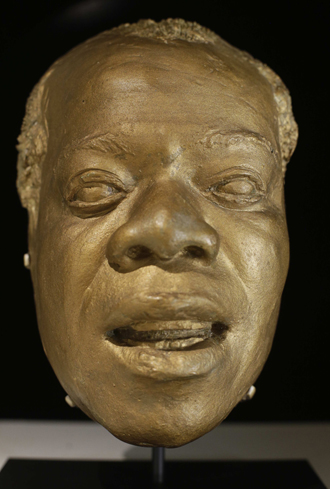 NEW YORK - To mark the 10th anniversary of the Louis Armstrong museum in the modest brick house where he lived for 28 years, curators are unveiling one of the jazz trumpeter’s most unusual artifacts - a plaster mask that had been stored in a cupboard for decades.

Armstrong, who was known for documenting his career in unusual ways, had the life mask with a painted bronze-patina finish made in the 1950s. David Reese, curator of the Louis Armstrong House Museum, said it reveals creases on his forehead, bags under his eyes and scars on his lips from a lifetime of horn-playing.

The museum still isn’t sure who made the mask, but a photo of Armstrong proudly holding it alongside an unidentified couple may provide clues. Armstrong must have been pleased with it because there are photos showing it hanging in the house at the top of the stairs.

Armstrong’s two-story home in the Corona section of Queens is remarkably understated for the charismatic performer whose improvisational playing style and raspy singing won him fame as far back as the 1920s.

The house and its furnishings, including a funky, blue wood-lacquered kitchen, are virtually unchanged from when Armstrong lived there with his wife, Lucille, from 1943 to 1971, when he died from a heart attack in his bedroom at age 69.

The man known as Satchmo could have lived in a house with “a pool in the shape of a trumpet” but chose to stay in the working-class neighborhood.

When Armstrong’s bus would return from a tour, children from the block would help carry his trumpet and suitcases inside the house. “Then Lucille would fix up bowls of ice cream for everybody, and they would watch Westerns together on TV,” he said.

After Lucille died in 1983, Armstrong’s vast collection of home-recorded tapes, photographs, scrapbooks and other material was donated to Queens College by the Louis Armstrong Educational Foundation. It is the largest publicly held archival collection devoted to a jazz musician in the world. “The house was frozen in time. It was stuffed,” Cogswell said. “Louis was a packrat.” AP