FDI changing to research and IT

FDI changing to research and IT 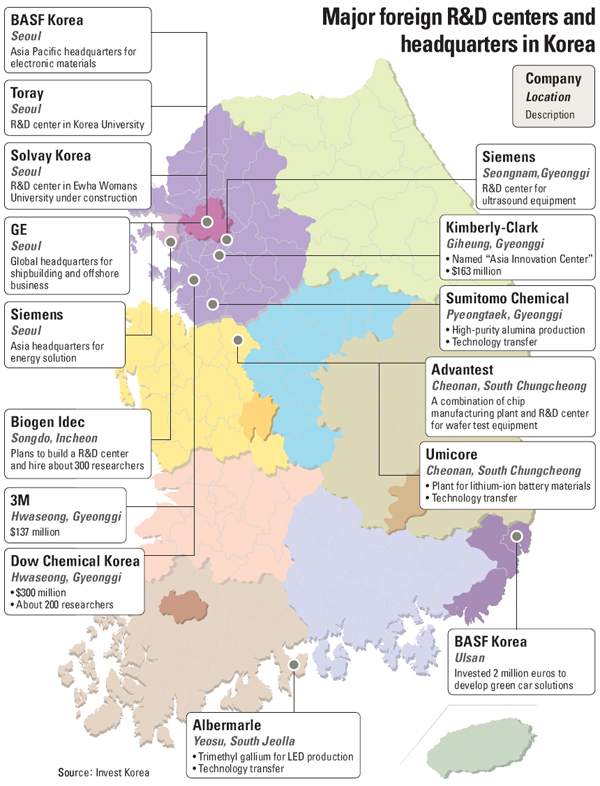 As Korea has become one of the world’s leading high-tech economies, with global titans like Samsung Electronics, the nature of foreign investment in the nation has changed as well.

Over the past six decades, the relationships between Korea and foreign businesses have advanced from rudimentary investment in low-end manufacturing industries to the establishment of high-level research and development centers.

Although the Korean market is relatively small compared to giants like China and Japan, and more regulated than free trade havens like Hong Kong and Singapore, foreign companies see Korea as a more crucial location for product development because of well-educated researchers and cutting-edge IT infrastructure.

In the 1960s and 1970s, the amounts of foreign investment in Korea were relatively small by design and could mostly be found in manufacturing. Under Park Chung Hee, foreign investment was valued mostly for the expertise and technology local companies could gain from it.

“The Korean government opened up its economy even more after suffering the Asian financial crisis in the late 1990s,” said an official from Invest Korea. “Various investment-related policies have been amended over time so that they favor foreign companies.”

Today, not only is foreign investment much higher in Korea, but the kind of investment has totally changed. Foreign investment is now more about high-level research and development, which often requires collaborating with local companies.

As Korea has changed, so too has the region. Korea may be the fourth-largest economy in Asia, but it now faces stiffer competition from giants like India, China and Japan.

Surprisingly, though, a number of renowned multinational companies have turned to Korea, changing their investment focus to R&D and relocating their Asia headquarters or R&D centers here to tap into the country’s wealth of highly-educated researchers and cutting-edge IT infrastructure. Businesses are also sending experienced technicians to Korea in order to boost exchanges in human resources.

The change in investment patterns is in line with President Park Geun-hye’s emphasis on “open innovation,” a key element of her creative economy initiative.

“A creative economy can be achieved through borderless exchanges of technology, finance and workforces,” Park said in a speech at the APEC CEO Summit in Bali last week.

Her remarks show how growing ties are more than just free trade but are also about advanced partnerships and collaboration between Korean and foreign companies.

One major example is Siemens, a German electrical engineering company that established its Asia headquarters for energy solutions in Seoul earlier this month, aiming to enhance R&D cooperation with local companies.

According to the company, Korea was chosen for the headquarters owing to the country’s broad networks of free trade agreements and outstanding engineers, and the government’s determination to support R&D investment and improve the business environment. 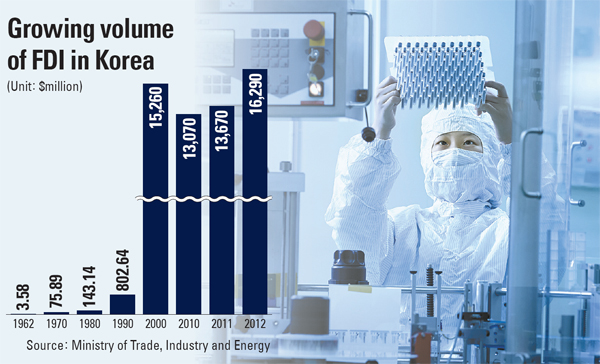 BASF Korea has also opened the Asia-Pacific headquarters for electronic materials in Seoul, as well as a separate R&D center.

“Korea is the most important market in the electronics industry,” said Shin Woo-sung, chief executive of BASF Korea. “The country will provide crucial momentum for the company’s growth in the Asia-Pacific region.”

Industry officials note that Korea serves as something of a test bed for many foreign companies - they think that if they succeed in the Korean market then they can succeed anywhere.

“R&D is the very start of product selling,” said an industry official. “R&D is an important process for companies that wish to develop products and tap into other markets. It is significant that foreign companies are considering Korea as a location to build their R&D centers.”

Along with Siemens and BASF Korea, there are many other foreign companies that have set up or plan to establish R&D centers and headquarters in Korea.

Solvay Korea, for example, currently has an R&D center under construction at Ewha Womans University, in western Seoul, while Kimberly-Clark, maker of Kleenex and other consumer goods, has an Asia Innovation Center in Giheung, Gyeonggi. In addition, General Electric’s global headquarters for shipbuilding and offshore business is located in Seoul.

“It is a significant change to notice that there have been only eight R&D centers built by foreign companies in the past 12 years, but this year alone five new R&D centers or Asia headquarters have been created during the first six months,” said Han Ki-won, commissioner of Invest Korea, an affiliate of the Korea Trade-Investment Promotion Agency. “These companies are choosing Korea, not because of appealing incentives, but because of the country’s improving business environment.”

According to the World Bank’s recent report titled “2013 Doing Business,” Korea was listed as the eighth-easiest country in which to do business out of 185, trailing only Singapore, Hong Kong, New Zealand, the United States, Denmark, Norway and the United Kingdom. The rankings looked at a variety of criteria, including minimum capital requirements, obtaining an electrical connection and registering property.

The 2013 report showed that Korea ranks especially high when it comes to setting up an electrical connection (third), trading across borders (third) and enforcing contracts (second).

“With an improvement in business environment for foreign companies over time, the number of foreign companies investing in Korea has increased significantly,” said an official from the Korea Trade-Investment Promotion Agency.

According to Trade Ministry data, in 1990 there were 1,678 foreign-capital companies investing in the country. In 2011, however, the figure jumped to 14,809 companies employing some 501,000 employees.

Furthermore, data showed that in 2011 foreign companies contributed to boosting Korea’s exports. Foreign companies exported a total of $100.7 billion worth of goods, accounting for 18.1 percent of Korea’s total exports - the best results ever compiled by the Trade Ministry.

“We are aiming to attract more R&D centers to locate themselves in Korea,” said Yang Hae-koo, an official from the Trade Ministry’s trade policy department. “In the past when foreign companies invested mainly in the manufacturing sector, they hired many employees doing the simplest jobs. But having R&D centers in Korea allows companies to hire more research-based workers, which helps boost innovation.”

Although Korea has seen an improvement in attracting foreign direct investment into the country, there are still challenges that the country must overcome.

“When I think of the Korean business environment, the first thing that comes up into my mind is management-labor union conflicts,” said a foreign businessman who wished to be unnamed. “There have been extreme examples in the past, like the Ssangyong Motor crisis several years ago.”

In 2009, the labor union of Ssangyong Motor, the country’s smallest automaker, launched a nationwide sit-in protesting the management’s massive layoffs. Photos of the militant protests at the company topped headlines for months.

“Foreign financial companies have recently reduced their operations in Korea or have withdrawn their businesses, and the move is closely related to the lack of predictability in financial regulations and consistency,” said an official from the Korea Institute of Finance.

According to data by the Financial Supervisory Service, 31 foreign financial companies have closed their businesses and left Korea since 2003, including banks, insurance firms, securities firms and asset management companies.

There are also leading financial companies that are in the process of withdrawing their operations from Korea, including Goldman Sachs Asset Management. ING Group has also recently confirmed it will sell its Korean insurance unit to a local private equity group, MBK Partners.

“As for companies in the manufacturing sector, they can develop or produce products in Korea and sell them elsewhere, but for financial companies the market is limited to only Korea,” said an official from the Financial Supervisory Service. “And the volume of the Korean industry isn’t that big, which makes it difficult for foreign financial companies to tap into the market and succeed.”