Korea’s corporations: Backbone of a miracle

Korea’s corporations: Backbone of a miracle

In the past 60 years, Korea overcame the destruction of war with rapid industrialization and democratization that has become internationally known as the “Miracle on the Han River.”

No longer a poor outlier, Korea is the world’s 15th-largest economy in terms of gross domestic product and the No. 8 exporter with value exceeding more than $550 billion annually, a dramatic increase from $18 million in 1955, according to data from Statistics Korea.

According to a 2005 report by Samsung Economic Research Institute (SERI), the history of Korean companies’ growth can be explained by the process of “meeting challenges and fighting back.”

“Companies’ experience of past success sometimes became the cause of their next risk, and they reduced the trial-and-error process by building risk management know-how,” the institute said in the report. “There was no answer for them from the start, but companies need to work together to come up with a solution [against the given environment].”

However, history also shows that not all companies thrived. According to a 2011 report by the Korea Chamber of Commerce and Industry, 73 companies fell out of the top 100 from 1980-2010. And recent data from Chaebul.com, an online information provider on conglomerates, showed that among 19,060 companies with assets of 10 billion won ($9.3 million) today, only 480 have been in business 50 years or more, with just six in business for 100 years.

The phrase “too big to fail” didn’t apply to Korea’s corporate history. Among the nation’s top 10 conglomerates in 1964, only Samsung and LG (back then Lucky) remain among the elite today.

Experts said the growth of such companies is linked with the industrial needs of the country. From 1955 to 1970, Korea was busy working to establish basic industrial facilities that could eventually help spur economic growth.

“There were still a bit of economic resources left, even after the Korean War,” says Rhee Young-hoon, a professor of economics at Seoul National University. “But in the 1950s, we have to consider that most companies grew by receiving assets that had been owned by the Japanese from the government and aid from the United States.”

In this era, the “three white” businesses - milling, sugar and cotton (textiles) - boomed, fulfilling basic needs of the population after the war. According to SERI, half of the top 10 conglomerates in 1965 involved one of those three businesses.

Construction companies also started to awaken during this period by rebuilding infrastructure that was destroyed during the 1950-53 Korean War. Importers enjoyed a heyday bringing in fertilizer, cement and oil, the raw materials for other businesses.

In the 1960s, the government tried to move further into trade with exports focusing on labor-intensive industries like shoes and textiles. According to data from the institute, these two industries accounted for more than 60 percent of exports in 1970.

However, experts say the golden age of chaebol growth was in the 1970s and 1980s, when the country’s economic paradigm shifted to heavy industries with a greater emphasis on exports under the leadership of President Park Chung Hee, father of President Park Geun-hye. Some companies that prospered in the 1950s and 1960s failed to adapt to changes at home and abroad, while others were weakened by the oil crisis in the early 1970s.

During this time, the government selected six heavy industries - steel, nonferrous metals, shipbuilding, chemicals, machine tools and electronics - and put its best effort into setting up a platform where companies could diversify their businesses and access capital.

Revenues of the top six conglomerates - Hyundai, Samsung, Lucky Goldstar (LG), Daewoo, Sunkyung (SK) and Ssangyong - totaled 400 billion won in 1973; by 1980, their combined revenues soared to 14.7 trillion won. At the same time, the number of affiliates increased nearly threefold from 116 to 308 in just seven years.

“The corporations from the 1970s to late 1980s grew up rapidly and robustly because it was the real beginning of industrial growth,” says Kim Soo-wook, a professor of operations management at Seoul National University Business School. “However, at that time they were only focusing on how to increase their size.”

The corporations managed to take that growth momentum into the 1990s, with more and more small and midsize companies starting to climb up the ladder as the entire economy grew.

However, the health of Korean conglomerates wasn’t always relevant to the size of the group, according to Kim, who contends that many companies started to fall into what he describes as “the trap of complexity.”

“Since consumers’ needs were getting more diverse, more companies started to roll out a greater variety of products that all required various parts and complex production processes. That also boosted the growth of suppliers and other companies that manufactured such parts and facilities,” Kim says. “As companies got bigger and ever more complex, they also faced difficulties with their communication and flexibility skills.”

Not only was the nature of business changing at a breakneck pace in the 1990s, the external environment also proved challenging for the conglomerates as Korean society entered a democratization stage that catalyzed the nation’s workers to organize and form labor unions. As a result of the movement, base salaries of workers increased, which at the same time meant a new burden for employers, according to data from SERI.

In addition, under President Kim Young-sam, the Korean market - including financial sectors - started to open its doors to foreigners. Experts say that made competition more fierce and survival more difficult for many local companies.

Some companies in the 1990s perceived the changing trends, incorporating automation into the manufacturing process and investing in technology, while expanding their businesses into services like distribution and finance.

But many companies remained focused on getting bigger, and they were the ones that took the biggest hit in the Asian financial crisis of the late 1990s. Six of top 30 conglomerates - Kia, Halla, Jinro, Hanbo, Sammi and Haitai - went bankrupt in 1997 alone, while Daewoo Group, which had been one of the top five chaebol companies since the 1980s, was broken up. 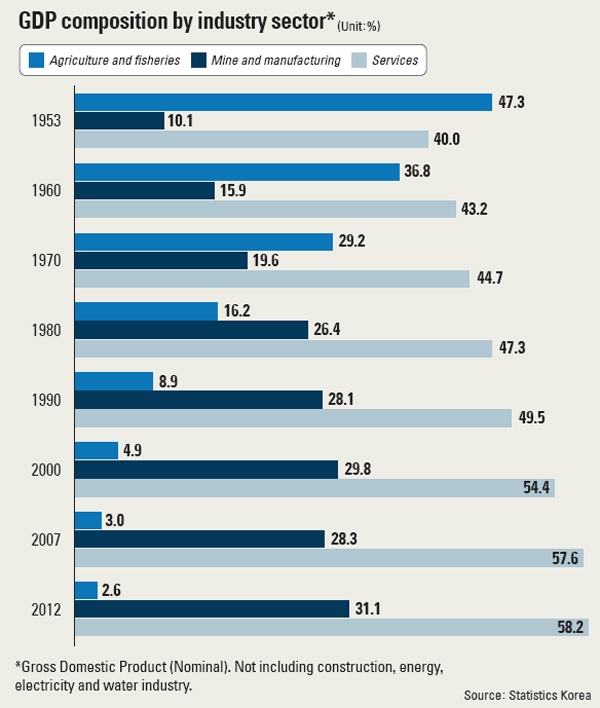 Financial crisis survivors started to focus on profitable and high value-added businesses like semiconductors and displays.

According to data from the research institute, IT products accounted for only 22.8 percent of Korean exports in 1998, but jumped to 31 percent in 2004.

Experts point out that the gap between conglomerates and SMEs got wider, while corporate social responsibility activities and solutions for sustainable growth took on greater importance for companies during the first decade of the new millennium.

And going through a series of challenges, some companies stepped up as global players.

“For Hyundai Motor, the company started to rise when it finally secured export markets like the United States, which it failed to do in the 1970s and 1980s,” says Ju Won, a researcher at Hyundai Research Institute. “For Samsung Electronics, it swiftly changed its core product from semiconductors to mobile phones within the same electronics industry.”

While Korean companies have been rebounding with improved product quality and enhanced services, the global financial crisis of 2008 was a wake-up call, especially for the construction and shipbuilding industries.

The impact is ongoing and the global economy still recovering. Ju says once-mighty industries like steel and shipbuilding that were at the heart of the “Miracle on the Han River” face new competition from upstarts in emerging economies like China.

Today, Korean companies are entering another challenging phase where their task is to identify and exploit new engines of economic growth, according Kim Jong-nyun, a senior researcher at SERI.

“The industry ranking of corporations has not changed much in last few decades, and what’s important these days is that the external business environment is changing rapidly with the global economy expected to have a low rate of growth for the near term,” Kim says. “For a new growth engine, the biomedical and medical industry has been cited, but companies really need to work harder to find their best future resources.”

What looks certain is that the future of Korea’s conglomerates will depend on how they prepare for and react to external opportunities and risks.

Throughout the history of family-owned chaebol, there have been cases where conglomerates have broken into several groups following management disputes among founders’ successors.

But these breakups won’t be a problem so much as an opportunity to have multiple world-class companies if leaders are able to make wise management visions, according to Jun Yong-wook, a business administration professor at Sejong University.

“For companies to live long and grow further, there should be a rapid transformation of the business domain in response to shifting trends and continuous investment on core competencies,” Jun said. “Conglomerates like Samsung, which have been in the top position since the late 1990s, were good at this, especially maintaining their investment in fostering a top-quality work force.”