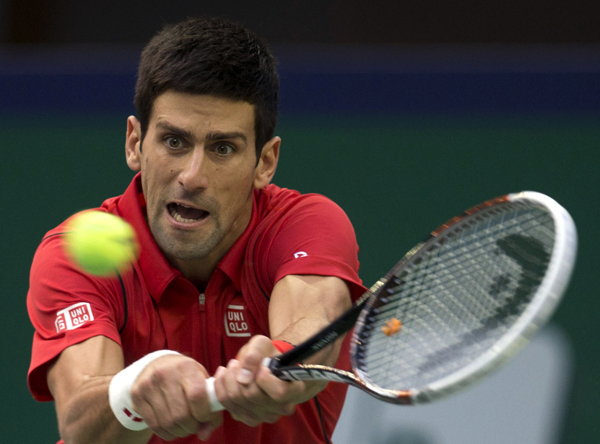 SHANGHAI - Novak Djokovic maintained his dominance in China by holding off Juan Martin del Potro, 6-1, 3-6, 7-6 (3) on Sunday to capture a second Shanghai Masters title and extend his winning streak in the country to 20 consecutive matches.

The Serb completed a back-to-back sweep of titles at the China Open in Beijing and the Shanghai Masters for the second straight year. He’s now earned seven titles overall in China - the most he’s won in any country.

Djokovic had to overcome a strong challenge from del Potro, who fended off two match points late in the third set, but couldn’t put any pressure on Djokovic’s serve down the stretch and appeared to fade in the tiebreak.

“He’s a big fighter. All the way up to the last point, I don’t know if I’m going to win the match,” Djokovic said. “His forehand is one of the best in the game, one of the best I’ve ever played against. It’s a huge weapon and once it’s on, it’s very dangerous.”

For Djokovic, the title has added significance, coming just days after he lost his top ranking to Rafael Nadal, who lost to del Potro in the semifinals. He can’t retake the top spot this week, but Djokovic has been focused on finishing the year strongly to stay within striking distance.

The match looked like it might be a runaway win for Djokovic early on as he raced out to a 5-0 lead in the first set. But the momentum shifted in the second set when del Potro began connecting on his serve and cracking the same forehand winners he used to sweep Nadal off the court in straight sets in the previous round.

He broke Djokovic to take an early lead, then played a magnificent game to save three break points to hold for 5-2 before closing out the set. AP