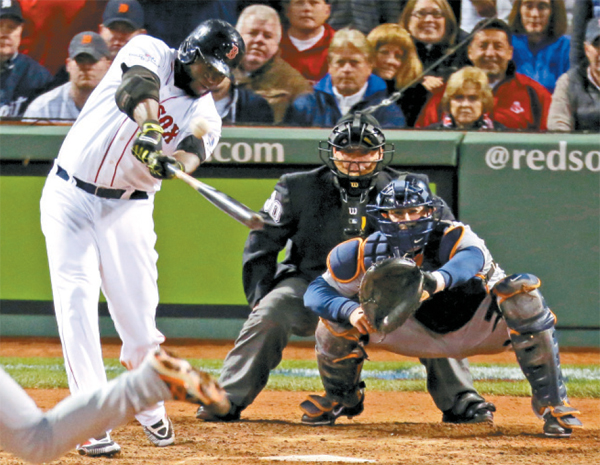 David Ortiz of the Boston Red Sox hits a grand slam in the eighth inning of Game 2 of the American League Championship Series against the Detroit Tigers on Sunday. [AP/NEWSIS]

BOSTON - David Ortiz blasted a game-tying grand slam in the eighth inning to ease Boston’s struggles at the plate as the Red Sox rallied for a 6-5 victory over Detroit on Sunday that squared the American League Championship Series at one game each.

The Red Sox were dominated by Detroit pitching in the series opener on Saturday and fared little better against starter Max Scherzer a day later.

Scherzer, who won 21 games during the regular season, struck out 13 Red Sox batters in a dominant outing, as he gave up one run on two hits before leaving the mound with a 5-1 lead after seven innings.

The Tigers needed just six more outs and looked set to take a 2-0 series lead back home to Detroit, but after the Red Sox put up a run in the bottom of the sixth, Ortiz smashed a grand slam home run in the eighth to tie the game at 5-5.

“I knew I put a good swing on it,” Ortiz said. “I got [Detroit outfielder Torii Hunter] chasing everything out there, he almost caught the ball. But I thank God it went in the bullpen.”

Jonny Gomes then led off the ninth with an infield single, reached second base on an error, and scored on Jarrod Saltalamacchia’s RBI single.

The best-of-seven series continues with Game 3 in Detroit on Tuesday.

“Looked like we had one in hand and let one get away, there’s no question about that,” Detroit manager Jim Leyland said. “It’s playoff baseball.”

The Tigers used five relievers, with Joaquin Benoit surrendering the Ortiz blast, before Rick Porcello came on in the ninth to take the loss.

Trailing by four runs and struggling to connect bat to ball, Boston finally found their form in the eighth when Will Middlebrooks doubled to left field, Jacoby Ellsbury walked and Dustin Pedroia loaded the bases with a single.

That set the stage for Ortiz, a two-time World Series champion, who has made a career of memorable hits in key moments, and he did not disappoint a jubilant Fenway Park with another trademark clutch blast.

Before Ortiz’s heroics, however, Boston had been stunted by Detroit’s pitching.

The Tigers’ Anibal Sanchez combined with four relievers for a one-hitter in Game 1, and Detroit held the Red Sox hitless through five innings on Sunday.

Miguel Cabrera and Alex Avila both homered for Detroit, and Avila finished with three RBI in the losing effort.