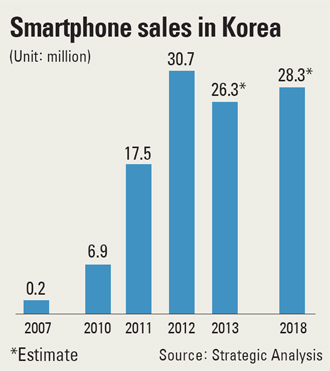 Korea’s smartphone market is poised for its first-ever downsizing this year, a U.S. market research company predicted on Sunday.

Strategic Analysis estimated the number of smartphones that will be sold in Korea this year at 26.3 million, about 14 percent less than last year’s 30.7 million. The domestic smartphone market has never recorded a year-on-year contraction since Apple introduced the iPhone in 2007.

After a decline this year, Strategic Analysis predicted that the Korean smartphone market will turn around again next year and continue to grow through 2018, but not as fast as it did in the past.

In explaining the projected decline this year, industry observers cited the fast-maturing domestic market for smartphones as well as strengthened restrictions on industry subsidies for the purchase of the devices.

Other major smartphone markets like China, the United States, India and Japan will continue to grow, according to Strategic Analysis. It said the Chinese market will go from 173.4 million last year to 315.5 million this year and reach 424.2 million by 2018.