Lessons from the ‘hidden champions’

Lessons from the ‘hidden champions’ 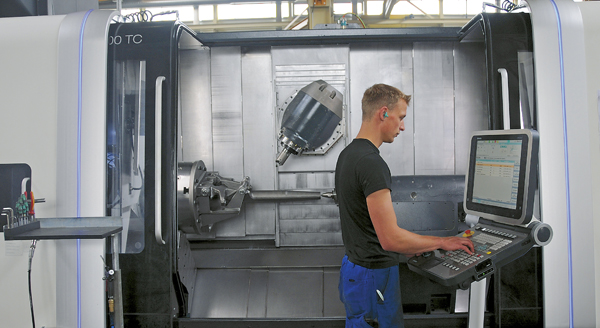 A worker checks a monitor that tracks assembly progress at the factory of Doppelmayr, a cable car maker in Wolfurt, Austria. Provided by the company

WOLFURT, Austria - Surrounded by strong neighbors like Germany, Switzerland and Italy, and the towering Alps, on 30,000 square meters (7.4 acres) of land in Wolfurt, a baby-faced Austrian teen in blue overalls is focused on welding together pieces of metal to be assembled into a cable car.

Inside the container-like plant of Doppelmayr, a family-run company that builds cable cars and ski lifts in the western Austrian state of Vorarlberg, it is dim even at midday. A cacophony of metal striking metal or being dropped on the floor fills the space. The plant doesn’t look so clean. It doesn’t have jaw-dropping, cutting-edge equipment, either.

Yet it is where some of the best cable cars, gondolas and ski lifts in the world are produced.

“We don’t have a shiny, nice building here, so most people find it hard to find us, but this is one of Doppelmayr’s characteristics,” said Bernd Schedler, CEO of the company. “We don’t have to show off because we can prove that we are a champion by delivering nice products.”

Doppelmayr could have been a high-profile business in Korea if it had accepted an order from North Korean leader Kim Jong-un to build a ski lift for his dream project - Maksikryong Ski Resort.

The company was established by Konrad Doppelmayr in 1892 and has been guarding its obscurity ever since. 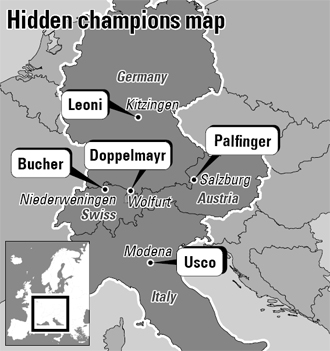 The case of Doppelmayr illustrates the biggest strength of the “hidden champions,” small but strong enterprises in Europe.

Created in 1995 by Hermann Simon, a German expert in business strategy, marketing and pricing, there are a few conditions for businesses to be called hidden champions: a company should be No. 1 on its continent and No. 3 in the world, have sales of $100 million (now $1 billion, adjusted for inflation) and boost exports.

In Korea, more and louder voices are calling for Korean small enterprises to benchmark the sustainable growth of European hidden champions. Unlike their European counterparts that have been around for hundreds of years, one of 10 small business entities stay afloat in Korea’s unique economic structure in which more than 80 percent of gross domestic product is from conglomerates.

Under the Park Geun-hye government’s creative economy initiative, which aims to foster start-ups and create jobs, there also are rising calls for a change in the country’s conglomerate-friendly business environment.

Against this backdrop, a group of 17 Korean entrepreneurs and researchers visited five hidden champions in Germany, Austria, Switzerland and Italy on a program developed by Kotra (Korea Trade-Investment Promotion Agency) early this month. The secrets to success of the hidden champions, according to the participants, are understated but aggressive investment, consistent development of niche technology and creative marketing.

What grabbed the attention of Korean businessmen most was the European companies’ aggressive investment.

Doppelmayr merged with Garaventa Seilbahnen, a ropeway company in Switzerland in 2002, to solidify its technological capability.

After the merger, the company continued to produce the world’s best ski lifts, gondolas and cable cars year after year, and it saw a 138 percent jump in sales over eight years to 618 million euros ($837.3 million) in 2010, which served as a stepping stone for a second stage of growth, the company CEO said. 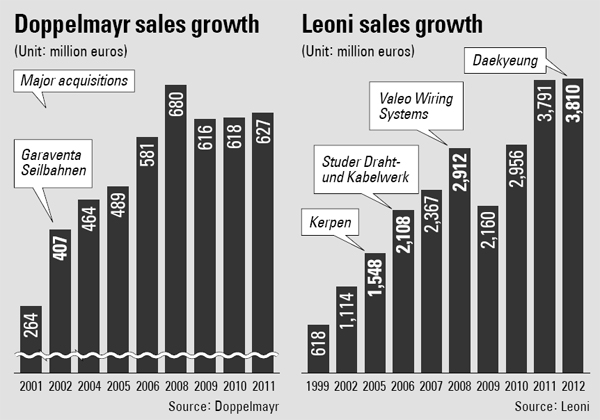 Doppelmayr now exports its products to 88 countries and has subsidiaries and partners in more than 30.

From 2001 through 2012, Leoni, a wiring-system company in Germany, acquired as many as five companies, and every time it did, it saw a significant boost in sales.

Since it was established in 1989, USCO has taken over five companies. Through the acquisitions, the company has eight production centers and partners in 25 regions.

Despite the global financial crisis in 2008, USCO’s turnover continued rising from 58 million euros in 2003 to 300 million euros last year.

USCO President Massimo Galassini boasted that the company has achieved a balanced market share across the globe owing to the successful M&A plans. Unlike other European companies that have focused on domestic markets and neighboring markets, 29 percent of USCO’s sales are in North America, 20 percent in Central and East Asia, and 18 percent in Europe, according to the company.

Bucher-Schoerling, a 200-year-old compact sweeper producer based in Switzerland, acquired Schorling, a maker of train cars that can clean subway stations and tunnels, in 1994. The company also has a branch in Busan.

All the companies made the right decision to expand, while maintaining sound financial health.

“We only invest when we have enough liquidity, so financially, luckily we are very healthy,” said Rolf Huber, vice president of Bucher-Schoerling. “We have our own internal treasury system that keeps track of how we manage money every day.”

“It’s just amazing that these companies could have done so many M&As,” said Kim Yong-ho, CEO of Hapsung Medea, a Korean manufacturer of parts for semiconductor equipment. “As an entrepreneur, I haven’t thought of doing M&A as a means to expand my company due to fear of risks.”

Another common factor in the success of the hidden champions turns out to be consistent research and development (R&D) to improve their niche technology.

The Korean businessmen also noticed that European companies are playing in niche markets they have never thought of with their original technologies.

“The secret to their success, I think, is not the level of technology, but the originality of the technology they have and niche markets where they play,” said Kim Ki-hong, CEO of SKA, a developer of materials for heat exchangers.

It is notable the companies have been making continuous efforts to upgrade their existing technologies for a long time.

According to Simon’s investigation, hidden champions reinvest 5 percent of their sales revenue on average in R&D; Korean companies reinvest about 1.5 percent.

Governments spare no support for R&D, too. They frequently offer projects for small businesses and boost competition to develop better technology.

“Thankfully, the government offers us projects very often to which we can apply our technologies,” said Wolfgang Langhoff, R&D vice president of Leoni. “It encourages companies to come up with better technologies for society and provides subsidies to cover 30 percent to 40 percent of the total cost.”

For example, Bucher-Schoerling can save a few million euros per project thanks to Switzerland’s federal R&D partnership program.

When the federal government opens up a project, the company can apply with its own technology. If it is approved, the project can be started with 50 percent financial support from the Swiss Federal Institute of Technology in Zurich and the other 50 percent from Swiss Federal Laboratories for Materials Science and Technology.

As the company keeps bidding for similar federal projects, it can effectively accumulate technological capability and competitiveness.

“Why these European companies have been able to maintain sustainable growth is they have been operating in very small niche markets of traditional industries, unlike Korean start-ups that mostly operate in fast-changing industries like IT,” said Kim Min-seok, a research fellow at LG Economic Research Institute.

USCO President Galassini believes marketing capability is the most important factor for his company. USCO was founded largely based on Galassini’s active marketing efforts.

“There is no company like USCO in Italy, which started off with purchasing and reselling somebody else’s products,” the president said. The company had no plant and no technology to manufacture its products in the beginning. It bought parts even from Korea until 2004, before it began its own production in 2005.

“One of my marketing know-hows is to become very close friends with customers,” said Galassini. “And we keep our relationships with various customers for years by having a strong sales team that is just like a soccer team.”