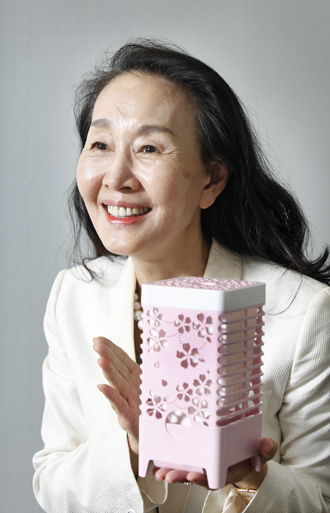 Entrepreneur Han Mi-young, born in the year the 1950-53 Korean War ended, has seen the rise of the nation and its business sector, but from the vantage of a woman. Korea’s economy has been so male-dominated and its business sector bound together through old-boy networks - and new-boy networks as well - that her perspective is almost as if it is through a looking glass.

The good news is that the looking glass is shattering. Women have opportunities now, even as entrepreneurs. Han has helped make that happen as head of the Korean Women Inventors Association from 2002 until last February.

“People have begun to acknowledge that all of the business of a nation can’t be run by one half of the population,” Han says. “We need to tap the workforce of women.”

Like many a Korean girl in the years after the war, Han was born into a family that ran a business to survive. Her entrepreneur father ran a medium-sized metal company, and she learned from an early age the basic concepts of businesses and commercial activities.

“Back in my college years, I felt as if living as a housewife was my destiny because almost every woman lived like that,” she says. “It was a social norm or an established idea.”

But when her husband’s work brought the couple to the U.S., she felt the winds of change, even though she was living as a housewife in Los Angeles.

“I could sense social perceptions had changed as we entered 1990,” she says, “and that was the main drive that made me begin my career.”

She saw a new product being marketed in the U.S. called the NuBra, a backless and shoulderless bra that fits into place with adhesive. Han bought the rights to sell the product in Korea and Japan.

The business took off from day one, but Han had to leave it to take care of her mother, who fell ill. She says the experience gave her the confidence to spot the commercial potential of new products.

That’s how she got interested in inventions and patents.

“When we think of inventions and getting patents, people think that only applies to a select number of specialists like scientists or engineers, but that’s not the case,” she says. “A good idea for an invention can arise when you feel some kind of inconvenience - and you try to improve the situation. As women are still responsible for doing household chores, they are in the perfect position to invent things that help with the housework.”

As head of the Korean Women Inventors Association, she helped ordinary women turn their ideas into patents through the association’s free lectures on intellectual property rights and how to protect them.

“In the past, women were relegated to minor, manual jobs,” she says, “which paid a minimum wage. I want to get them more sustainable, relatively high-paying jobs. Turning a practical idea into a patent can offer them money and also the freedom to look after their families.”

In Han’s first year as head of the association, there were only 100 enrolled members, and most of them weren’t very active. Now the number of members surpasses 4,500. “I think the explosion in the membership is attributable to a changing social atmosphere,” she says.

Han herself holds a patent on her own invention: A tissue holder that keeps tissues from collecting dust.

And as head of the association, she saw some members hit it big with their products. The most successful was former housewife Han Kyung-hee and her floor steam cleaner.

But women are still severely underrepresented in the Korean workforce. As of 2011, female economic activity in Korea is ranked 27th among 30 OECD countries.

The international organization noted that “considerable gains in educational attainment have yet to translate into better labor market outcomes for women; female labor force participation rates are about the same now as 20 years ago [55 percent compared to the OECD average of 65 percent], with 10 percent of all managerial positions being held by women [compared to about one-third across the OECD].”

Korea’s gender pay gap is also the highest among OECD countries at 39 percent.

Han said that such dismal data keeps her motivated to further empower women.

“More and more women get educated but, even with a more favorable social environment for working women than before, many women just quit their jobs after marriage,” she says.

“We can’t blame the women because Korea still doesn’t have a proper social welfare system for working women. That’s why I think my role is important.”

After her departure from the Korean Women Inventors Association, Han set up the Korea International Women’s Invention Exposition with a focus on women in developing countries.

The organization, in cooperation with UN’s World Intellectual Property Organization, will hold summits of women inventors around the world to discuss ways to encourage more women to participate in the intellectual property field.

“Korea has a long way to go to fully tap its female workforce,” Han admits, “but there are countries that face much miserable conditions. While giving help to local women inventors, I want to reach out to potential inventors in developing countries too.”

In May, President Park Geun-hye awarded Han an honorary medal for her work helping Korean women.