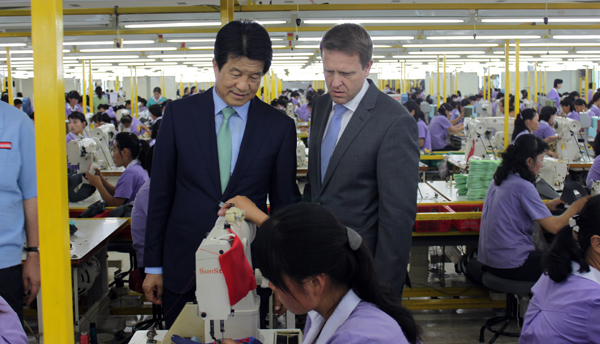 A manager from Me & Friends AG, a shoe importer based in Holzkirchen, Germany, visits the Kaesong Industrial Complex with the company’s business partner, Moon Chang-sub, left, CEO of Samduk Tongsang Co., a Busan-based shoemaker, on Sept. 26. Provided by Samduk Tongsang

President Park Geun-hye’s ambitious plan to turn the Kaesong Industrial Complex into an international investment destination is bumping up against North Korea’s intransigence on improving conditions there.

Kim Eui-do, a spokesman for South Korea’s Ministry of Unification, told reporters yesterday that the government has indefinitely postponed a seminar to tout the complex to investors from countries outside of Korea.

“The government sent a telegram to the North last Friday saying we will postpone an investment seminar for foreign businessmen, which was supposed to be held inside the complex on Oct. 31,” Kim said. “There was no response from North Korea yet.”

Expectations were actually running high for the seminar. Some potential investors recently visited the park to check it out.

Kim said the seminar was postponed because of a deadlock in negotiations with North Korea to improve three recurring problems at the factory park, which so far has investors from South Korea only: Improving the communications infrastructure, streamlining customs regulations and facilitating entry procedures for cargo.

“As you all know, negotiations over these three major issues are being delayed,” Kim said. “And those issues are top priorities for foreign investors. So we decided to postpone the seminar.”

North Korea withdrew its workers from the Kaesong park in April over disgruntlement with South Korea. When the park finally reopened in September after the five-month shutdown, President Park said she wanted to develop it into an international factory project by improving the infrastructure.

Analysts say South Korea wants businesses from other countries in the park as a way of preventing North Korea from unilaterally shutting it down in the future when relations are poor between the North and the South.

Both Koreas formed so-called subcommittees to negotiate changes to the park, and they’ve been meeting almost every day in Kaesong.

However, on Sept. 25, North Korea abruptly postponed a meeting of the subcommittees for infrastructure, right after it unilaterally canceled reunions of war-separated families scheduled for late September.

The three major problems are crucial for foreign investors, like Michael Ertl, CEO of Me & Friends AG, a shoe importer based in Holzkirchen, Germany. Ertl said he was considering a joint investment in the complex with Samduk Tongsang Co., a South Korean shoemaker based in Busan.

But he wants major improvements in the communications infrastructure.

“It is true we are considering a joint venture with Samduk,” Ertl told the Korea JoongAng Daily in an e-mail interview. “But there must be an improvement in transportation and communications, such as e-mail and mobile phones, to an international standard.”

Ertl said he visited Kaesong two weeks ago but few things have changed since his previous trip in 2009.

“My first trip was in 2009,” he said. “And since then, there was not much development in the Kaesong complex.”

Currently, there is no use of cell phones or the Internet in the complex. Also, the entry of all cargo to the park must be reported to North Korea three days prior to delivery, which causes inconvenience.

“It’s really hard to connect with people at the Kaesong park, and using communication facilities in the complex is really expensive,” an official at JC Com Co., a South Korean manufacturer of optical communication devices running a factory in Kaesong, said.

“Due to poor communications and the three-day prior notice policy, it is difficult for us to set a detailed plan for transportation of inventory.”

One of the other complaints is that North Korea closely scrutinizes all of the cargo entering the complex.

“Based on the international standard, it is normal to scrutinize only 0.2 percent of all cargo imported to a certain country,” Hong Jin-seok, a Unification Ministry official in charge of supporting the Kaesong Industrial Complex, said. “But North Korea basically wants to check all cargo.”

Apart from those three problems, the origin of the products manufactured in Kaesong is also a barrier for internationalization of the park.

Currently, all products made in Kaesong are first exported to South Korea and then re-exported to other countries. But some of them are still labeled “Made in Kaesong” or “Made in DPRK,” based on the custom laws of each country. Products labeled as North Korea-made can be heavily taxed or prohibited by some countries.

So far, not a single foreign company has announced an investment in the complex. The South Korean business owners with factories in Kaesong say their foreign partners are reluctant to invest due to the risk of another shutdown.

“In recent years, some foreign buyers told us that they were mulling a joint venture in Kaesong, but after the recent shutdown they turned to Vietnam,” Yoo Dong-ok, chairman of Daewha Fuel Pump, a pump maker, said. “The biggest reason for foreign investors to hesitate is the political uncertainty surrounding the complex, as it has been used for political purposes by North and South Korea.”

In 2012, Ikea, a Swedish furniture manufacturer, considered building a factory in the Kaesong park, but it dropped the idea amidst frosty inter-Korean relations, according to the Unification Ministry.

“It is true that Ikea inquired about the Kaesong complex to us,” a Unification Ministry official said. “But since then, it has not asked any information.”

Ertl of Me & Friends also pointed out that the government should take measures to guarantee a stable operation at the complex.

“There must be the security that a shutdown like in the last months will not happen again,” he said. “Maybe the government can provide a guarantee that investors will be compensated in the case of a shutdown.”

North Korea unilaterally closed the park in April, pulling out its 53,000 workers, because it was angry with South Korea.

It imposed an entry ban on all Southern workers, resulting in a shutdown that lasted for five months.

The complex finally reopened in September after negotiators from the two Koreas finally reached an agreement. Pyongyang pledged to not close down the complex unilaterally again.

With the restart of operations, South Korean President Park announced her plan for “internationalization” of the complex with an aim to lure foreign investors and companies to it.

During her visit to Russia in September for a G-20 meeting, she even told the Italian president that his country’s apparel makers could benefit from North Korea’s cheap labor, which costs about $130 a month.

On Oct. 6, a Unification Ministry official also told reporters at a briefing that the government is reviewing the “flexible application of May 24 sanctions” on foreign companies, implying they could ease the sanctions for foreign investors.

In the wake of the March 2012 sinking of the South Korean warship Cheonan, which South Korea blames on the North, the Lee Myung-bak government banned any new investment on North Korean territory, including in Kaesong.

The government is also planning to negotiate with Washington on Nov. 4 over including products made in Kaesong in the Korea-U.S. free trade agreement.

“North Korea is reluctant about the idea of internationalization of the Kaesong complex, because it regards the park as a business between the two Koreas,” Cho Bong-hyun, a research fellow at the IBK Institute, said.

“They also fear turning the park into an international region could lead to some reforms.”