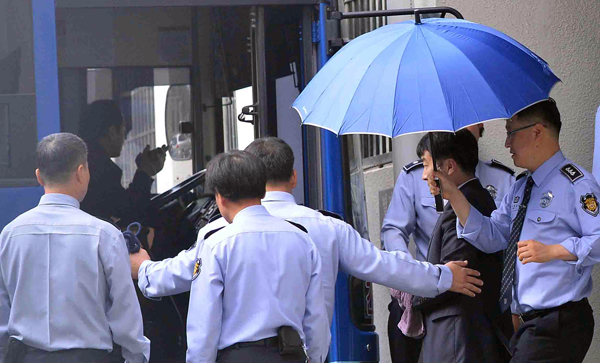 Representative Lee Seok-ki of the Unified Progressive Party, who is indicted on charges of conspiring to overthrow the government, leaves the Suwon District Court yesterday after the first pretrial preparation. [NEWSIS]

A pretrial preparation for Lee Seok-ki, a troubled Unified Progressive Party lawmaker indicted on charges that he attempted to overthrow the government, was held yesterday at the Suwon District Court.

Lee’s 14-member defense team called on the court to dismiss the prosecution’s indictment against him for the alleged rebellion plot, saying the indictment breached one of its legal principles.

His team ­­claimed that prosecutors breached the principle by submitting evidence to the court that was not related to Lee’s alleged rebellion charge. “Prosecutors’ indictment has 108 pages. Irrelevant facts were intermingled with what Lee is indicted for in the indictment,” said Kim Chil-jun, the lawyer leading the defense team. “By doing so, the prosecution is attempting to mislead a court to have a pretrial judgment and [unlawfully] makes the defense for Lee more difficult.”

Kim was referring to the prosecution’s allegations that Lee attended a meeting of the Revolutionary Organization, a pro-Pyongyang underground group, on May 12 at a building in Mapo District’s Hapjeong-dong, where Lee was suspected of plotting a rebellion with other group members.

The prosecution did not charge RO as an antistate organization.

Kim also claimed that the prosecutor included contents of Lee’s dialogue with others, which he said should not have been included in the indictment.

Prosecutors countered that the evidence and explanation regarding RO is essential to find the truth about the May 10 and 12 RO meeting held by Lee. The prosecutors also claimed that all the evidence in the case was obtained in a lawful way.

The legal brawl between the two sides lasted more than an hour and a half. Lee Jung-hee, chairwoman of the leftist UPP, was among the 14 lawyers representing Lee.

The next pretrial preparation is scheduled for next Tuesday.