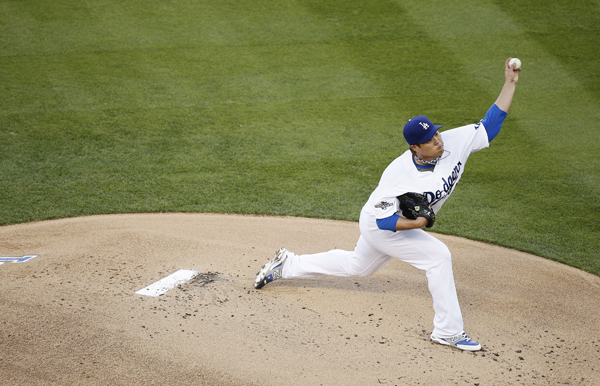 Los Angeles Dodgers starting pitcher Ryu Hyun-Jin during the first inning of Game 3 of the National League Championship Series against the St. Louis Cardinals on Monday in Los Angeles. [AP/NEWSIS]

Ryu Hyun-jin of the Los Angeles Dodgers proved himself to be a big-game pitcher, giving up just three hits over seven innings and out-dueling Adam Wainwright of the St. Louis Cardinals to give the Dodgers a 3-0 victory on Monday in the National League Championship Series.

Ryu and Wainwright were nearly even through the first three scoreless innings, with Wainwright giving up one hit. Ryu, who struggled in his first career postseason start in the division series against Atlanta, retired 12 of his first 13 batters, yielding only a walk.

Ryu became the first Korea-born starter to win a league championship series game and the first Dodger starter to not allow a run while pitching seven innings or more. He also is the first to allow three hits or less since Orel Hershiser, who started Game 2 of the 1988 World Series.

Ryu was much improved after last week’s game in Atlanta, when he lasted just three innings as the first South Korean pitcher to start a playoff game. In that game, he allowed four runs on six hits, but made a no-decision as the Dodgers won. Ryu also struck out four and walked one.

The left-hander didn’t allow a Cardinals runner past second base. David Freese’s single to right leading off the fifth was their first hit of the game.

In a pregame interview, Ryu said that he would focus more on not allowing runs than pitching many innings, but he accomplished both by throwing 108 pitches over seven innings.

Dodgers’ manager Don Mattingly said before the game that the key for Ryu to win was locating his fastballs in the right spots.

Ryu responded to his manager’s call. Most of his fastballs were between 92 mph and 95 mph in the first inning and were hitting both sides of the plate. Ryu also often used his slider and changeup effectively, just like when he won a game against the Cardinals during the regular season. Of his 108 pitches, only 52 pitches were fastballs.

“It probably was the game that I pitched hard the most in my entire career,” Ryu said after the game.

Adrian Gonzalez’s RBI double ended a 1-for-17 drought for the Dodgers with runners in scoring positions and Yasiel Puig and Hanley Ramirez also had run-scoring hits for the Dodgers, who trail the best-of-seven series, 2-1. Game 4 is Tuesday at Dodger Stadium, followed by Game 5 on Wednesday.

Los Angeles got Ramirez and center fielder Andre Ethier back in the lineup after both proved in batting practice that they were healthy enough to play. Ramirez wore a lightweight flak jacket to protect his broken left rib - having been hit by a pitch from Joe Kelly in Game 1 - while Ethier has been bothered by shin splints.

Ramirez singled his first time up off Wainwright and then helped the Dodgers extend their lead 3-0 in the eighth.

Ramirez hit a soft single off Seth Maness over the head of new second baseman Kolten Wong to score Carl Crawford. The speedy Crawford, on second base after a one-out single, rounded third and never stopped running when the throw from the outfield went to second base.

On a close play at the plate, Crawford barely beat the tag by catcher Yadier Molina.

Freese was replaced by a pinch-runner in the fifth because of tightness in his right calf. He is day-to-day.

Mattingly came out to the mound accompanied by translator Martin Kim with two outs in the seventh. Ryu responded by striking out Matt Adams to end the inning as catcher A.J. Ellis pumped his right arm in the air.

Kenley Jansen pitched a perfect ninth for a save.

After the first two games in St. Louis were decided by one run, the Dodgers got to Wainwright in the fourth, taking a 2-0 lead.

Gonzalez’s double down the right-field line scored Mark Ellis, who doubled leading off. With two outs, Puig tripled off the wall in right, scoring Gonzalez.