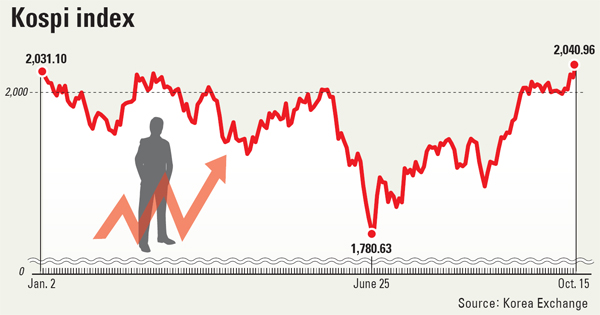 The market was bullish as foreign investors continued their buying spree for 33 trading days. There are rising concerns, however, that the massive inflow of foreign capital into the local financial market would strengthen the currency and hurt export companies. 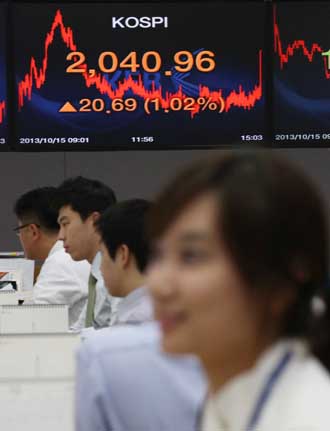 An electric board at the Korea Exchange Bank, central Seoul, shows the Kospi closing at 2,040, which is the highest close this year. Foreign investors have been on a buying spree since late August. By Kim Kyung-bin

According to the Korea Exchange, foreign investors have been net buyers of shares since July 22 despite turmoil in the global financial market amid growing speculation that the U.S. Fed will soon begin to withdraw its bond-purchasing program.

Although the stock markets of emerging economies, including Indonesia and India, have tumbled due to foreign capital outflow, the Korean stock market has remained stable and has been relatively unaffected by external jitters primarily on the strength of foreign investors.

“Foreign investors seem to be pulling out from emerging markets and investing in relatively safer markets like Korea and Taiwan,” said Oh Hyun-seok, an official from Samsung Securities.

The bullish Kospi market yesterday, meanwhile, also was boosted by indexes that closed higher overnight in the United States and Europe. The improvement in stock markets elsewhere came following reports from Washington that there had been progress in Senate negotiations and the United States is moving closer to a deal that would reopen the government and extend the debt ceiling.

Although the Kospi index is maintaining its momentum, there are concerns growing over the strengthening won following a large inflow of foreign capital into the stock market and signs of a breakthrough in the United States.

It is the first time the Korean won strengthened to reach the 1,060 mark in 177 trading days.

“Korea’s economic fundamentals remain strong to external jitters and what shows that is that foreign investors keep buying local shares,” said an official from the financial regulator. “But what we’re concerned about most at the moment is currency volatility, as this could hurt local exporters and bring down their price competitiveness.”