Coffee and ideas in China

Coffee and ideas in China 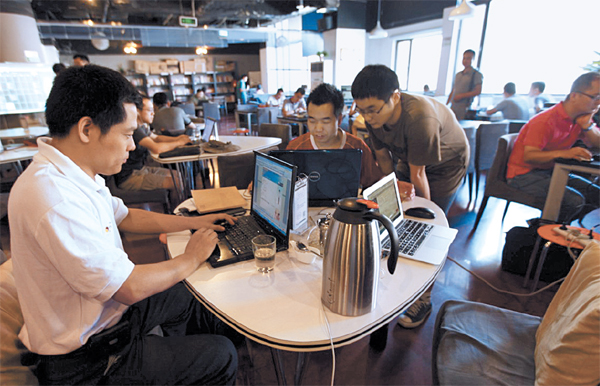 Customers at Cheku Cafe in Beijing, which caters to young entrepreneurs, work on their laptops. Provided by the cafe

In Beijing, there is a special coffee shop that all individuals wishing to start their own business should visit. Called Cheku Cafe, at first glance the shop seems no different from other casual hangouts, but careful observation reveals an air of energy and excitement.

Cheku in Chinese means “garage,” and the Cheku Cafe in northwestern Beijing is a place where young people hoping to become entrepreneurs gather to share and debate ideas. The name is based on how Bill Gates and Steve Jobs brainstormed ideas that would become Microsoft and Apple in their garages.

Along with Cheku Cafe, there are about 10 coffee shops in Beijing - as well as in Shanghai, Guangzhou and Nanjing - with a similar concept to boost startups and investment.

When the JoongAng Ilbo visited Cheku Cafe last month, it was crowded with would-be entrepreneurs. On one wall, there were posters and notices seeking investors and technological collaboration.

Inside the coffee shop were about 100 tables filled with young people researching on laptops and groups engaged in lively debate.

“The so-called Garage Cafes are where people are able to work on their start-up plans,” said Yang Yong of Peking University’s entrepreneur club. “Establishing your own venture is something that isn’t difficult; it is something anyone can start.”

Yang added that the biggest advantage to visiting Cheku Cafe for anyone with thoughts of starting their own business is that they are able to share with each other their know-how and establish a network.

“The cafe regularly holds small business fairs, and venture capitalists attend those fairs and from time to time decide to invest in certain ideas,” Yang said.

The Zhongguancun area in Beijing, where Cheku Cafe is located in Haidian District, is often referred to as China’s Silicon Valley. This year, through July, about 3,000 start-ups opened in the area.

Although many economists have noted that China’s manufacturing growth has recently been slowing, start-up companies are replacing traditional manufacturers as China’s overall growth engine.

Last year, the number of venture companies in China reached 430,000, 16 times the number in Korea. The volume of investments by venture-related funds is about 28 trillion won ($26.3 billion), 20 times the amount in Korea.

“These days, entrepreneurs in western China, which lags in industrial development compared to other regions, also ask for investment in their start-up businesses,” said Wang Guangyu, chairman and chief executive of China Soft Capital.

The venture business in China started to pick up years ago based on the challenging minds of a new generation and government support.

“Young Chinese born after 1980 - often referred to as Post-1980s Chinese or the ‘Balinghou’ - turned aggressive in starting their own businesses as they became members of society” after finishing school, Wang said.

Balinghous with the passion and will to become successful entrepreneurs were encouraged by the 2009 establishment of ChiNext, the Chinese version of Nasdaq. Many young Chinese dared to believe that they, too, might become billionaires.

“There seems to be a virtuous cycle as China has been witnessing successful venture businessmen who become mentors to junior colleagues and others wishing to start their own businesses who later on succeed,” said Zhang Rui, chief executive of Social Touch, a leading social media company.

The Chinese government, meanwhile, has also been a leading supporter of boosting start-ups. Although the country is socialist, when it comes to injecting capital into venture companies, China’s system is open like those of capitalist countries.

Investors are able to not only invest in yuan currency but also in dollars, and investment can be done through stocks, bonds, bank loans and other vehicles.

The Chinese government changed its policy direction to one that supports young people who want to start their own companies after the 2008 global financial crisis when the country suffered high unemployment.

“There are many elements to why China got a boost in start-ups,” said Byun Yong-seop of the Korea Trade Investment-Promotion Agency based in Beijing. “Chinese people are by nature commercially minded, the government has introduced a Western-style venture technique, and rapidly developing IT technology has been responsible for creating a wave of people who want to start their own businesses.”

Byun added that such elements have created an environment where young Chinese are able to try start-ups without fear of failure.

And the start-up boom isn’t just happening in China.

In the United States, for example, an increasing number of people are spurning MBA programs for schools that emphasize establishing venture companies.

Last month, Chance Griffin quit his job as an executive at a company in North Carolina and enrolled at Chicago’s Starter School, an institution for those who wish to learn how to start companies.

He told the JoongAng Ilbo he considered an MBA but doubted it would be worth the work and money.

Starter School and General Assembly in New York have been established to teach the business skills needed to start venture companies. The enrollment fee ranges from as little as $3,900 for a 10-week course to as much as $33,000 for a nine-month course. Lectures are offered by instructors with hands-on experience, including businessmen and program developers.

The Wall Street Journal has reported on these programs, saying, “Increasingly, they are attracting college graduates who might otherwise attend business school who want to master the art of creating businesses or polishing investor pitches.

“Although these schools make up a sliver of the business-education market, for certain students they may be emerging as a faster, cheaper rival to the two-year MBA.”