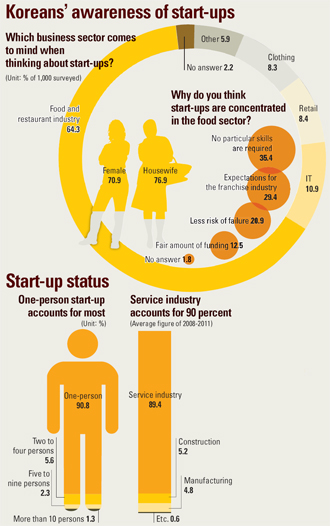 However, Park closed the store in less than a year.

“There are so many fried chicken stores around that we worked until dawn to survive, but there was nothing more we could do,” she said, shaking her head.

Then Park started working in the kitchen of a restaurant again, where she got paid 50,000 won a day. Her husband is currently looking for a food delivery job.

About 18,000 start-ups go out of business each year. Fried chicken stores, in particular, seem to fail easily.

“Such start-ups are merely opening more stores,” said Lee Min-hwa, president of the Institute of Creative Economy in Seoul. “The national economy, as well as households, can regain vitality only with the establishment of creative start-ups where entrepreneurship, investment and ideas interlock smoothly.”

The German state of Saxony is a success story with gross domestic product per capita of $65,000.

Referring to the U.S. Silicon Valley, it is known as Silicon Saxony.

This is in spite of the fact that 90 percent of the capital Dresden was in ruins during World War II.

Moreover, before reunification, Saxony was in Communist East Germany. Entrepreneur was an unfamiliar word and most residents relied on agriculture and animal husbandry.

The change began in the early 1990s after unification, with the arrival of three Max Planck institutes.

These institutes actively helped start-ups enter the market by supporting product development in cooperation with universities in the region.

The government-funded research center Fraunhofer was brightly lit at midnight Sept. 10 with contract researchers busy at work. Contract research is the process of making a small amount of prototype using technology developed by companies.

“The role of the research institute is bridging the gap among start-ups, universities and the market,” said Uwe Vogel of the Organic Semiconductor Center at Fraunhofer. 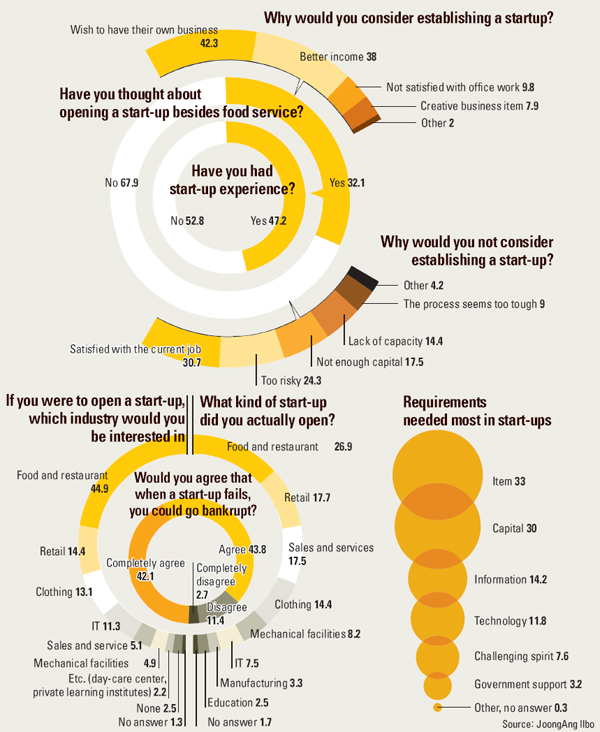 Also, universities in the region encourage students to establish start-ups. Dresden University of Technology pays the cost of patents for its students’ start-ups.

“Dresden University of Technology has the most technology patents, 143, as of last year among all universities in Germany,” said professor Gerhard Rodel, the university’s head of internationalization.

With the building of this entrepreneurial foundation, multinational companies like Siemens and Infineon opened branch offices in Saxony.

Although the Saxony population is only 500,000, 80 institutes and 10 universities cooperate to support or establish start-ups.

In Korea, on the other hand, entrepreneurs are largely on their own.

It took Lee Jung-mi, the 47-year-old CEO of JM Green, nine years to start her business after applying for a patent for an ultrasonic bird-repelling device used by farmers.

“There is almost no place that supports individuals with prototype production costs,” Lee said. “I could only become a beneficiary after calling various organizations and government agencies dozens of times and sending letters to them.”

After making prototypes, merchandising the product was even more difficult.

The device cost 50 million won to develop and could not be merchandised because Lee could not afford the cost of tests required for government approval.

Since start-up support systems are not backed up properly, it is commonplace that technology and ideas die in Korea.

Korea has the fourth-highest number of patents in the world, yet just 20 percent of patented technologies are commercialized.

The Korea Technology Exchange under the Industry and Technology Agency, which was the best of a bad bunch, even closed.

Under such conditions, start-ups and venture businesses usually lost steam. New initial public offerings of start-ups shrank from 134 in 2001 to 17 last year.

In order to address the harsh ecosystem for start-ups, the Ministry of Science, ICT and Future Planning came up with the Creative Economy Town policy on Sept. 30.

It provides business support information and advice from experts so that ideas from the general public can be developed.

In less than two weeks, 1,600 ideas have been proposed.

“The biggest problem with domestic entrepreneurship is that there is no cloud bridge that fosters technology at its idea level to salable technology,” said Ko Ki-seok, director of IP Strategy Planning Department at the Ministry of Science, ICT and Future Planning. “It is urgent that we create an environment where start-up-related technologies and ideas are actively traded like stocks.”