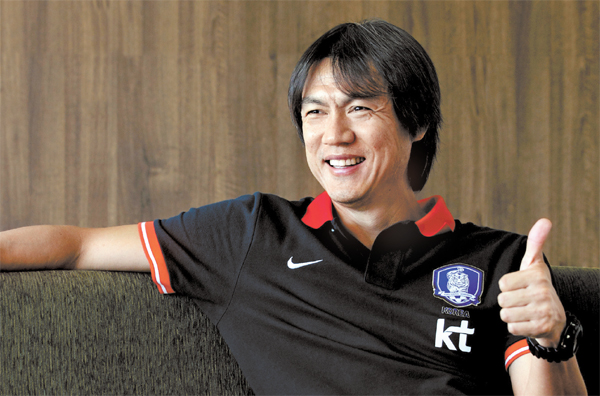 It’s hard to see national football team head coach Hong Myung-bo with a big smile. But there were two memorable moments that made Hong beam.

The first was in the penalty shoot-out of the quarterfinal match against Spain during the 2002 Korea-Japan World Cup.

After scoring the final goal that advanced Korea to the semifinals for the first time, he lifted his arms over his head and cheered with a big smile.

The other came 10 years later when he led the men’s football team in the 2012 London Olympics. He beamed at fans after defeating Japan, 2-0, in the bronze medal match. Each time he smiled, Korean football had produced a memorable moment.

Korean fans expect to see such smiles in next year’s Brazil World Cup.

Hong, 43, became head coach of the national football team with the World Cup less than a year away. When he was named captain of a sinking ship, fans and analysts worried that the Korea Football Association was placing too heavy a burden on the young coach’s shoulders.

Some said taking the national football team was akin to “taking a poisoned Holy Grail.” The national team clinched a berth in the World Cup for the ninth straight time, but recent performances in Asian preliminary games have caused fans anxiety.

When former manager Choi Kang-hee resigned, the KFA considered hiring a big name foreign coach like Luiz Felipe Scolari who currently manages Brazil, but decided to give Hong a chance to lead the future of Korean football.

“I’m not alone,” Hong was quoted as saying after he was named head coach. “There are loyal fans, coaching staff and media who always support the national team. I think I’m going to Brazil together with them.”

Hong has never had an exclusive interview with any media outlets, but the Ilgan Sports earned a chance to speak with Hong, who congratulated Ilgan on its 44th anniversary.

Q. It has been three months that you have been the head coach of the national team. How do you feel?

A. I think I’m having much more stress than I had when I was the Olympic team coach because the most important thing in A-matches is the result rather than how we played, and I also need to manage many things that are not related to football. I still feel strange that bits of gossip about our players or coaching staff are covered through media every day. The team has only won one game since I became the head coach, but I don’t worry about the record that much. I worry about missing more important things [than just winning a game].

How does it feel to lose an A-match game?

When I lose an A-match game, I first feel very sorry for fans, but I think we are moving forward as planned. I lost to Brazil, one of the strongest contenders for the 2014 World Cup, but I’m not afraid of losing, at least for now, because every one of them is part of our preparation for the bigger event. I am generally satisfied with our performance because I think we are improving every day.

Many Korean players in European leagues such as forward Ji Dong-won of Sunderland, defender Yun Suk-young of Queens Park Rangers and striker Park Chu-young of Arsenal are struggling now.

I met Park when I went to the U.K. and heard from him that he recently recovered from a thigh injury and joined the team’s regular training only weeks ago. It must be a difficult situation for him but, considering his age, he should not waste time on a bench.

He needs to find a way to start a game very soon. I don’t worry about Ji and Yun too much because they are still young and there still is time to challenge them.

They might have some failures now, but such experiences will definitely improve them in the future. And it is good for Ki Sung-yueng that he found a new team where he can earn a chance to play every week.

Ki didn’t get many chances to play a game after Swansea City acquired many midfielders who can play at his position, like Jonjo Shelvey from Liverpool FC. Ji had a good 2012-13 season with FC Augsburg in Bundesliga as a loaned player but has struggled after returning to Sunderland.

Yun signed with QRP in the middle of the 2012-13 season, but never played an official game, and the team is now in the Championship League of the U.K.

Can Park Ji-sung, 31, of PSV Eindhoven return to the national team?

[During the interview, Ilgan Sports asked Hong to select “World Football Best 11” no matter whether a player is retired or active, but Hong chose to do that among players who played while he was active. Hong put Park as the right winger of his 4-4-2 formation. “Considering his level of contribution to a team on the field and great stamina, no one can replace Park in that position,” Hong said.]

Fans said you are the most poker-faced coach ever.

I never intend it. But I think it just comes out naturally because I feel responsible for my job. I’m not a prosaic person, as you saw me smiling big in the past [laughs].

As manager of the national team you must be thinking about football all day long.

Not really. I try to solve problems as soon as possible when I get them and try to get rid of them as much as I can. I’m not really interested in movies, but I read newspapers and books. I’m currently reading Dale Carnegie’s “How to Win Friends and Influence People.”

[Hong added that he tries to read every article on politics, social affairs, sports and culture, but not economy and business. “I really didn’t enjoy stories talking about money and numbers,” he said.]

When you led a team composed of players younger than 20, you listened to pop music by young girl-groups such as Girls’ Generation to understand them better. There are many different age groups on the national team. Do you make any similar attempts?

I always think about how I should give my respect to players. Those young players have grown up and some of them are on my national team.

I try to control things happening on the field and during training, but I try not to care about their personal things.

We have about nine months to the World Cup. Are there any teams you don’t want to face in that event?

Brazil and Germany. Brazil will have huge fan support as the event will be held in their country, and they have always been one of the strongest contenders in the World Cup. Germany has been dominating football in recent few years when we look at the Champions League.