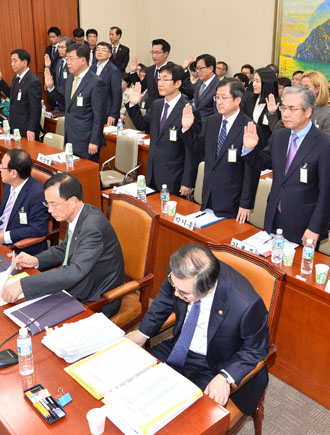 Several businessmen are sworn in as witnesses yesterday at a hearing of the National Policy Committee in the National Assembly. [NEWSIS]

The National Assembly faced growing complaints about the summoning of so many businessmen during its annual audit of government ministries and agencies.

The legislature began its 20-day inspection of the state’s administration this week, the first audit of the Park Geun-hye government. Yesterday was its second day.

About 40 businessmen appeared at the National Assembly yesterday to testify at several committees’ hearings.

According to the National Assembly, 196 businessmen and members of business lobby groups were summoned as witnesses for this year’s round of inspections. That figure is more than double the 80 business-related witnesses summoned in 2011.

The National Policy Committee called 19 businessmen as witnesses for its audits of the Fair Trade Commission, the Korea Consumer Agency and the Korea Fair Trade Mediation Agency. Lawmakers from the ruling and opposition parties focused their questions on the theme of large businesses abusing their smaller suppliers, contractors and franchises.

During the National Policy Committee hearing, witnesses had little chance to say much since most of the time was taken up by lawmakers asking questions and making statements.

Lim Choon-seng, president of Hansung Investment, said a single sentence, “My company is a properties rental business and we have nothing to do with automotive sales.” It turned out Lim was summoned for questioning by mistake.

The lawmakers also called Britta Seeger, CEO of Mercedes-Benz Korea, and other foreigners, but the questioning did not proceed smoothly despite the help of interpreters.

The sloppiness of the procedures prompted skepticism even from lawmakers. “I wonder what a tycoon can say at an audit,” grumbled a member of the National Policy Committee.

“I don’t know what I am doing here,” said Bae Jung-ho, CEO of Kooksoondang Brewery, after waiting four hours outside a committee room. “We’ve already made changes after the Fair Trade Commission gave an order. I don’t know why I have to be grilled.”

He also questioned if it was the National Assembly’s job to pressure his company to compensate alleged victims of unfair trade practices.

As the National Assembly’s pressure on the business community grows, companies are hiring more top executives with connections to lawmakers.

OCI Company, an energy and chemical firm, recently recruited Hou Man, a lawyer who served as a senior judge at the Seoul High Court, as its president. Hong Sa-duk, former Saenuri Party lawmaker and a key Park Geun-hye loyalist, was also recruited as a senior adviser of KT.