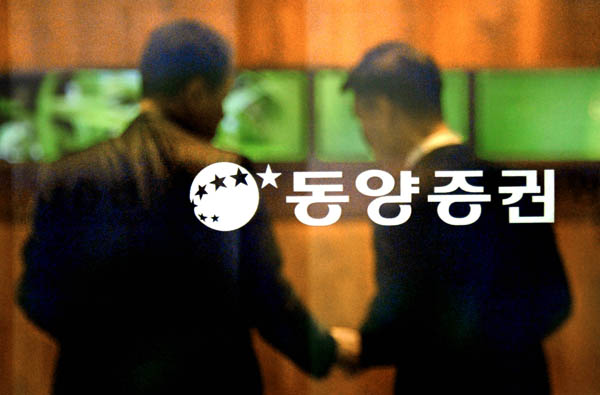 A scene through a window of Tongyang Securities in Euljiro, Jung District, Seoul, yesterday as investigators from the Seoul Central District Prosecutors’ Office raided and searched the offices of Tongyang Group. [NEWSIS]

Prosecutors yesterday raided the headquarters of Tongyang Group and some of its affiliates as part of a full-fledged investigation of alleged fraud and malpractice in issuing corporate bonds and commercial paper.

The prosecution is expected to focus its investigation on whether the 64-year-old chairman and senior executives at the firm were aware of the possibility that Tongyang’s affiliates would be forced to file for court receivership but still encouraged the sales of commercial paper earlier this year.

Prosecutors are also looking into whether the group deceived private investors by not informing them of the financial instability of its affiliates as it sold commercial paper and corporate bonds.

Chairman Hyun, a former prosecutor himself, allegedly ordered Tongyang Securities employees to advise investors to buy the bonds, especially in Tongyang Cement and Energy, which had a lower debt-to-equity ratio than other affiliates.

As the Tongyang crisis continues to unfold, and with private investors on the verge of losing more than 2 trillion won ($1.87 billion) in high-risk investments in the group, the Citizens’ Coalition for Economic Justice filed a complaint against Hyun on charges of breach of trust and fraud on Oct. 7.

The labor union of Tongyang Securities also accused Hyun of fraud on Friday, claiming the chairman ordered Tongyang’s brokerage arm to sell more than 150 billion won worth of commercial paper, even though he had no intention of repaying the debt and knew the units would soon file for court receivership.

Tongyang Securities has been criticized because it sold 156.8 billion won worth of asset-based commercial paper issued by the troubled chaebol from July to September this year.

After five Tongyang affiliates filed for court receivership late last month and earlier this month, about 49,000 individual investors who purchased commercial paper and bonds are on the brink of losing an estimated 2.3 trillion won in total. Tongyang is the nation’s 38th-largest conglomerate with 31 business units.

Feeling personally responsible for the clients’ losses, a woman worker at the securities firm’s Jeju branch committed suicide on Oct. 2, leaving a suicide note pleading with Chairman Hyun to return the money to the clients.

“Chairman, you can’t do this to individual clients and to us ... I apologize for not taking responsibility to the end. Chairman, please return all the money to clients,” the note read.

She was found dead inside her car, asphyxiated from burned charcoal briquettes.

Meanwhile, the Financial Supervisory Service yesterday accepted an investigation request from consumers to look into Tongyang Securities’ alleged unfair practices. The request was made by the Financial Consumer Agency on behalf of some 600 individuals.

“Considering there are many investors who feel victimized by Tongyang Securities and that most of the investors in Tongyang Securities’ commercial paper and corporate bonds are retail investors, we decided there is a need for a special inspection,” said an official from the FSS.

It was the first time that the state financial regulator accepted the consumer agency’s petition for a special investigation since the regulator introduced a new petition policy earlier this year, which allows financial consumers to request an FSS probe.