Korea gets win, some confidence

Korea gets win, some confidence 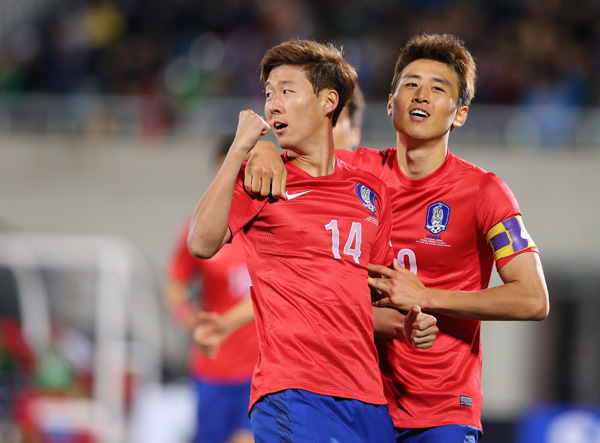 Forward Son Heung-min of Korea, left, celebrates with teammate Koo Ja-cheol after scoring a go-ahead goal in the 46th minute of the match against Mali held in Cheonan, South Chungcheong, on Tuesday. [NEWSIS]

Although the Taegeuk Warriors lost to Brazil, 2-0, on Saturday, the team was able to develop a stronger defense thanks to the play of Ki, who returned to the team for the first time in seven months after a controversial social media scandal.

In Tuesday’s game, forward Son Heung-min scored the go-ahead goal in the 46th minute and midfielder Lee Chung-yong of the Bolton Wanderers led the team’s offense with two assists. The national team has earned a record of two wins, three draws and three losses since Hong Myung-bo was appointed as the head coach in June.

Before the match, Hong said the game against Mali was a “must win” as Korea needed to regain confidence in A-matches and that the team would try to score as many goals as possible.

However, the match didn’t work out as Hong intended in the beginning. Korea dominated the midfield area by pressing opponents and cutting off Mali’s incoming passes. But Korea was hit by a surprise attack in the 27th minute as they allowed a goal by West Ham United forward Modibo Maiga, who scored with a header in a free kick situation. It was Mali’s only shot attempted in the first half, while Korea attempted 11 shots. But Korea bounced back in the 37th minute with midfielder Koo Ja-cheol’s penalty kick goal, thanks to a handball foul.

Korea took the lead early in the second half. In the 46th minute, Son scored the team’s second goal by striking a shot into the upper left corner of the net after receiving the ball from Lee, who later assisted on the team’s third goal in the 56th minute. Lee outpaced three Mali defenders with his fancy dribbling and passed to Cardiff City midfielder Kim Bo-kyung, who put the ball into the lower left corner of the net with his left foot.

“I’m satisfied with the result,” Hong said. “Offenders like Lee and forward Lee Keun-ho made many chances as they effectively penetrated to the opponents’ area, and others such as Son showed a great finish in scoring chances. Such things were what we intended to show in this match.”

The task in the match against Brazil was developing a stronger defense. Hong called up Ki for the first time after being appointed as the national team manager, though some fans were opposed to seeing the midfielder on the field as he had mocked former national team coach Choi Kang-hee on his secret Facebook page.

But Hong needed a decent midfielder who could fight against robust foreign players and distribute sharp passes to offenders in counterattack situations. The 1.87-meter (6-foot-1) midfielder led the team’s defense, especially in pressing FC Barcelona sensation Neymar in the match against Brazil that was held on Saturday. Some fans booed Ki when his name was introduced before the match started, but those catcalls were later changed to cheers as he and his double-volante strategy - putting two defensive midfielders in front of four defenders - with partner Han Kuk-young had a tremendous performance.